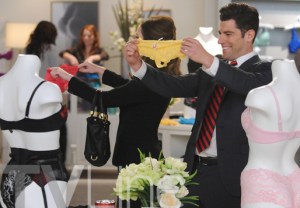 Admit it: You’re oddly intrigued as to why New Girl‘s Schmidt is grinning at a pair of yellow panties in the photo on the left. It’s OK. You’re among friends here. (And in a new batch of exclusive shots from the Fox comedy’s April 28 episode, there’s a lot more where that came from.)

The pics, from the penultimate Season 4 installment “Panty Gate,” show Schmidt and almost-ex-girlfriend Fawn perusing a lingerie store in the wake of her going commando — and getting caught — in the previous episode.

PHOTOS May Sweeps/Finale Spoilerpalooza! Get 100+ Spoilers and Pics From Your Fave Shows, Including New Girl

We also see Coach’s girlfriend May hanging out with Jess and Cece (looks like they’re offering her tea and sympathy) and Coach getting surrounded by a bevy of ladies at the bar (we hear the episode also sets up Coach’s eventual exit in the May 5 season finale).

Click through the gallery below, then hit the comments with your theories on what the not-pictured Nick and Winston are up to in the episode!