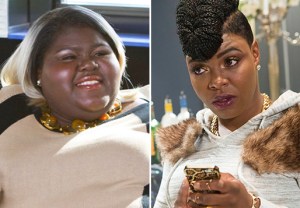 Empire‘s put-upon assistants are finally getting some respect.

Gabourey Sidibe and Ta’Rhonda Jones, who play Lucious’ and Cookie’s respective lackeys Becky and Porsha, have been elevated to full-fledged series regulars, TVLine has learned exclusively. (That noise you hear is Cookie fetching her own damn shoe.)

The pair’s promotions will take effect with the show’s upcoming second season.

Last month, following Empire‘s Season 1 finale, Ilene Chaiken commented on the series-regular prospects of Sidibe and Jones, telling TVLine’s Michael Slezak, “We love them both, and we want them both back as ongoing characters on the show.”