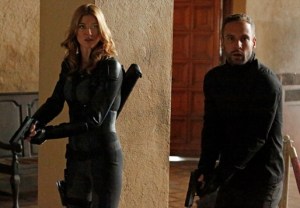 S.H.I.E.L.D. stars Nick Blood and Adrianne Palicki — who play ex-husband-and-wife duo Lance Hunter and Barbara “Bobbi” Morse, AKA Mockingbird — are being eyed to headline the offshoot, per our sister site Deadline.

Story elements yet to come in S.H.I.E.L.D.‘s second season will lay the groundwork for the prospective series, but there won’t be a “planted spinoff” episode, per se.

The project is being penned by S.H.I.E.L.D. executive producer Jeffrey Bell (whose writing credits also include Angel and The X-Files) and co-exec producer Paul Zbyszewski (Hawaii Five-0, Lost).

Palicki and Blood both joined the mothership drama this season as the newest members of Coulson’s team.