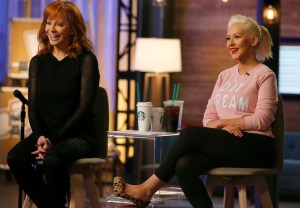 Yep, TVLine has your exclusive first look at the NBC singing competition’s outtakes reel, featuring the country superstar recalling her eponymous sitcom, engaging in some fart humor with Xtina and listening to Blake daydream about Kate Upton.

Reba will return to The Voice for this Tuesday’s results show (8/7c) to sing “Going Out Like That.”

Press PLAY below to watch the full highlight reel, then tell us which contestant (or contestants) have your allegiance this season!