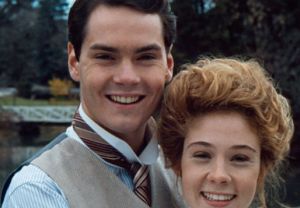 Jonathan Crombie, best known for playing Gilbert Blythe in the Anne of Green Gables miniseries and its sequels, has died, CBC News reports.

Crombie’s sister tells the Canadian news outlet that the actor, 48, suffered a brain hemorrhage and died in New York on April 15.

He had many roles in his 30-year career in TV and film, but is most known for playing the tormentor-turned-true-love of Anne Shirley in the 1985 Canadian miniseries Anne of Green Gables and its follow-ups Anne of Avonlea and Anne of Green Gables: The Continuing Story, which aired in the United States on PBS.

Crombie’s last credited part was in a January episode of The Good Wife.

Reign‘s Megan Follows, who had the title role in the miniseries, told CBC News she recalled “at times laughing so hard that you’d just be crying,” while working with Crombie. “He was so playful and silly… so his humor was always informed with that, which made him even funnier.”