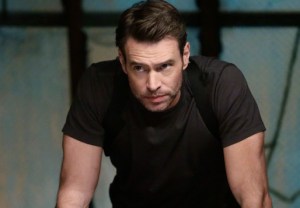 Is Scandal about to pull a fast one on us?

At the end of Thursday’s episode, Olivia’s beau, Russell, stabbed Scott Foley‘s Jake nearly a dozen times in the chest and stomach. It’s hard to imagine anyone — even death-defying Ballard — surviving such an assault. And the promo for next week’s episode, which features a frantic Quinn declaring, “Jake is dead. Jake. Is. Dead” while the character’s bloodied corpse rests on OPA’s conference table, seems to confirm that Foley’s Scandal run has come to an end.

The operative word there being seems.

In the unpredictable, bait-and-switchy world of Shondaland, things are rarely as they seem. As one skeptical TVLine commenter points out, a major character like Jake would almost certainly get a more explosive, satisfying send-off than the stairwell stabbing we witnessed Thursday night. “Oh, please. Jake’s not gonna die like that. He may die, but it’s gonna be a better death than one random guy who’s had five seconds of screen time getting the drop on him.”

What do you think? Was Jake’s death the real deal or a red herring? Vote in the poll below and then defend your choice in the comments!