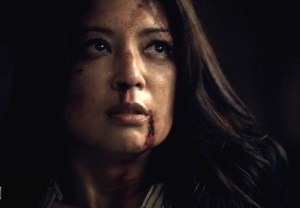 THE PERFORMANCE | Too often in TV flashbacks, we’re served a marginally different version of a character we already know well. But on this week’s S.H.I.E.L.D., Wen had occasion to inhabit a distinct Melinda May – one who had not yet been dubbed “The Cavalry.”

In the early flashbacks, it was the little things Wen did to distinguish the past May from present. Beaming warmly at husband Andrew as they looked forward to (ahem) “family planning.” Reacting to a Coulson quip with an audible “heh.” Carrying herself more softly (though still the dutiful agent) in an unfitted blazer, thanking a colleague for lending her his “tunes.” And just, you know… smiling, in general.

And then things went sideways.

This May still had heroic inclinations, as demonstrated by her extremely able infiltration of a warehouse guarded by mind-controlled friendlies. But she also had heart, hesitating to inflict on her pals any more damage than need be. And it was that softer side which got socked hardest when May came face-to-face with the op’s true adversary: a gifted, very young girl.

Wen showed us the storm of conflict churning inside May as she processed every conceivable outcome of this standoff, as insane Katya ended life after life with but a gesture. Then, when May’s hand stumbled upon the gun behind her, Wen’s expression shifted to one of clarity in purpose, dark as it may be. “Everything’s going to be all right,” the wannabe mother told Katya, before we cut to Coulson hearing the gunshot. In the coda that followed, back in the kitchen that had just been teeming with joy, Wen made clear that the gunshot that ended a young girl’s life also forever altered one woman’s world.

HONORABLE MENTION | Akin to Ming-Na Wen above, Jim Caviezel on Person of Interest has personified the strong and stoic, sometimes wry type. So when an episode such as “Terra Incognita” comes along, one must take notice. Reunited with former scene partner Taraji P. Henson, Caviezel found opportunity to tap into John Reese’s sliiiightly softer side, as the heavy brushed up against (yet never crossed) the line of “opening up,” during a stakeout. But it was the later sequences, when we discover John is no longer flashing back but delusional from blood loss and frigid temps, that Caviezel chilled us by allowing his steely alter ego to register the sober realization of both his predicament and his need to better connect with people, as he (mostly) did with Joss.

HONORABLE MENTION | If Monday’s episode of The Originals was, in fact, the last we’ll see of Mikael — though we’re skeptical, considering it’s not the first time he’s “officially” died — then Sebastian Roché certainly gave his ancient character the exit of a lifetime. Several lifetimes, even. Opposite an equally impressive Joseph Morgan, and without saying much at all, Roché conveyed the hopelessness of a centuries-old vampire facing the last moments of his afterlife. Even in his most desperate hour, he remained every bit the cold, calculating monster we’ve loved to hate since we first encountered him on The Vampire Diaries four years ago, and he will be missed.

HONORABLE MENTION | In Thursday’s episode of American Crime, Elvis Nolasco had us clutching the edges of our seats as Carter confessed to his sister (an also-superb Regina King) all the sins he had committed. What began as a quiet, heartbreaking chat — in which Carter divulged his past suicide attempt to Aliyah — quickly spiraled into an angry, almost violent acknowledgment of the ways in which he abused Matt and Gwen Skokie before murdering the former. Nolasco masterfully brought to life the storm of emotions inside his character, and although we shouldn’t sympathize with Carter, his portrayer somehow gave us reason to do exactly that.