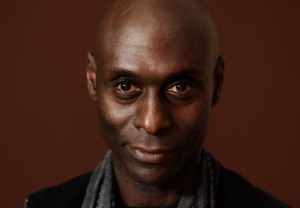 Perhaps the Castle finale takes place in an alt-universe?

Fringe vet Lance Reddick will guest-star in the ABC drama’s hush-hush Season 7 closer, an ABC rep confirms to TVLine. Details on his character — and the episode’s overall storyline — are being kept under wraps.

Castle co-star Penny Johnson Jerald unintentionally broke the Reddick casting news Wednesday when she tweeted a photo of the actor on set.

What do we have in common? Maryland representing! pic.twitter.com/SFTsYfnbYa

Previously, showrunner David Amann told TVLine that the finale will “focus on compelling, high-stakes story-telling surrounding Castle and Beckett mythology,” and that it’d offer a “satisfying end to the season‎.” (Reminder: Castle has not yet been renewed for an eighth season.) The episode is titled “Hollander’s Woods,” which is, of course, a reference to the “password” that Not Henry Jenkins used to earn Rick’s trust after his months-long disappearance/amnesia.