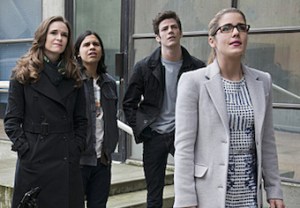 I wasn’t planning to write about The Flash this week, due to a lotta other TV going on this Tuesday night, but the episode was so especially (and surpris- ingly?) entertaining, it begged for comment.

There was a lot of good going on here, as Felicity and Ray visited Central City just in time to lay witness to The Bug-Eyed Bandit’s reign of terror. Though guest star Emily Kinney was given precious little to do besides sit in a chair and engage in wordplay, her tiny robotic army was kinda fun and sufficiently menacing.

Then again, maybe that’s my Cisco-level aversion to bees speaking. (I first got stung on the tuchus when I was 7. Still scarred.)

But more importantly to the bigger Arrow/Flash conversation, I’d be curious to hear a Flash-only viewer’s take on Felicity/Ray, because I suspect that they came off as kind of adorable to the uninitiated. Vlada Gelman and I were IMing during the episode and agreed that Ray simply “fits” better on the lighter, brighter Flash, while Emily Bett Rickards was afforded the opportunity in a while to play the Felicity we fell in nerd-love with, away from all the “gloom and doom” of Starling City (as the character herself put it).

This was also a highly quotable episode, from the “It’s a bird/It’s a plane” nod to Brandon Routh’s previous superhero turn, to Eddie marveling, “Wow. So everyone but Iris knows,” to Felicity finding a perverse joy in acquiring her own nemesis.

All that said, the awkward dinner date — while wholly designed to be awkward — was kind of hard to watch, if only because it’s a shame to see the otherwise solid Iris/Eddie romance get damaged by Barry’s secret. And Eddie’s, “Or what?” at the end was just cold. Iris deserves better.

Another quibble I have is Cisco’s “dreams,” though perhaps somebody better schooled in time travel fiction can point out anther instance where someone “remembered” their alternate existence. Me, I just need to hear the “science” that (theoretically) explains such a thing. Then again, it made for a great tag, as Cisco shared: “Dr. Wells is the Reverse-Flash. And he killed me.”

OK, I am off to fry those other, aforementioned TV fish. What did you think of “All-Star Team-Up”?