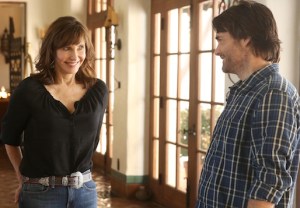 The Justified scene-stealer boarded Last Man on Earth Sunday as the latest survivor of a virus that obliterated most of human civilization.

Though the Fox series’ premise is a grim one, “We really have fun,” Steenburgen says. “I’m kind of a laugh junkie. It’s what I appreciate in life, because life is rich and sometimes it’s hard, and I really, really love to laugh and gravitate towards people who make me laugh.”

In the Will Forte-led comedy  — which since its debut has blossomed into an ensemble featuring Kristen Schaal (30 Rock), January Jones (Mad Men) and Mel Rodriguez (Getting On) — Steenburgen plays Gail, a southern widow who, alongside fellow survivor Erica (Cleopatra Coleman, Step Up Revolution), arrived in Arizona upon following Phil’s “Alive in Tucson” signs. Almost immediately, Phil attempted to bed both new arrivals by posing as a widower, but the jig was up when they discovered his wife, Carol, was alive and well.

We spoke to Steenburgen, who’ll soon be seen in Season 3 of Orange Is the New Black, about the decision to join Fox’s unique comedy, as well as her grisly Justified exit.

TVLINE | You’ve appeared on a lot of great, quirky TV comedies as of late, including Wilfred, Togetherness and now Last Man on Earth. What drew you to this project in particular?
I was a fan of Will Forte [from] Saturday Night Live and Nebraska before we began. I loved his work so much… I hadn’t seen anything quite like [Last Man] and just from a geeky point of view, just the way it’s lit alone is really interesting. Because we have a world where light is not so easy to come by.

TVLINE | Gail and Erica have clearly known each other for awhile now. Will we learn more about that friendship, or at this point is it more about assimilating them into the cul de sac?
I think it’s more the latter, although there’s definitely implications that they’re relationship was more than just friendship in some ways [Laughs] because they thought they were the last two people on Earth and they decided, you know, to have fun. [Laughs] …Mainly in this show, the past is the past and people are trying to get on with their new world. It’s less about looking back.

TVLINE | Will Gail be as quick to forgive Phil for his lies as Carol was, following his apology?
No, I don’t think so. [Laughs] I don’t want to spoil things for the future, but Gail’s a pretty strong character. She’s not naive. She’s also in a different place about Phil than Carol is. Carol’s honestly more vulnerable to Phil than Gail can ever be. Gail’s really interested in survival and her fairly hedonistic pursuits, so Phil just represents a man to her, at least in the beginning. Again, I don’t want to give stuff away that happens, but I just think that Carol and Gail are two different people as far as their relationships to Phil are concerned.

TVLINE | The trailer for next week’s episode teases that Phil winds up landing dates with both Gail and Erica. Does Gail’s date with Phil go as horribly, hysterically wrong as one might expect?
All kinds of things shift… He has two dates. What he does with that is the comedy, I think.

TVLINE | It seems like you’re enjoying yourself on that set.
In Last Man on Earth, last [Sunday] for example, there’s a scene where we’re having dinner with Phil. If you actually look at that, which I wouldn’t recommend you waste your time doing, my shoulders are shaking quite a bit. I couldn’t stop laughing, and they had to leave it in, because they didn’t really have any other choice… [Forte] is so much fun, and so funny, and that scene was one of the first ones that we did, so I wasn’t even prepared for how funny he is. It got a little bit better as the episodes went on, but not a lot better. I’m definitely the oldest person on the set, and I’m definitely the worst behaved person on set. There’s no doubt about it. Will never breaks. I just think I’m gonna be the badly behaved one. 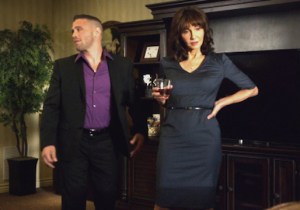 TVLINE | Lastly, I wanted to ask about your time on Justified, and what it was like to film that final struggle between Katherine and Mike.
That was amazing. I didn’t know what they were gonna write for Katherine’s ending, but I really loved that it had to do with his character, because I really enjoyed working with Jonathan [Kowalsky], this young actor who is so hungry to be the best actor that he can be. When they gave him such an important moment and let me have a such a great scene with him, I was really honored.

…I had asked them to give me a great death scene, and they did. It was extremely violent and extremely unpredictable because, my god, I shot the guy six times. [Laughs] Who knew that was gonna happen? He’s a bull. He’s a strong guy… I don’t really know how [Justified] ends. I just know how I ended. People are very passionate about it. I’ve gotten a lot of letters from people watching who seem really happy with how it all went down. I really enjoyed playing the despicable character, and I really, really enjoyed her demise.