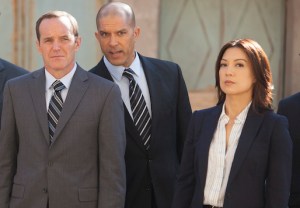 This week on ABC’s Agents of S.H.I.E.L.D., we learned what “earned” the onetime mild-mannered Melinda May the infamous nickname of “The Cavalry.” Meanwhile, for Skye: Guess who’s coming to dinner!

As May and Simmons were presented by Gonzales and Bobbi with more and more evidence that Coulson is seemingly up to something (dubbed “Theta Protocol” and involving 100 bunk beds and May’s ex-husband Andrew), we got flashbacks to the years-ago op in Bahrain, where May and Coulson led a Welcome Wagon to intercept a gifted individual, Eva Belyakov. After things go sideways and local thugs take Eva and a young girl hostage, S.H.I.E.L.D.’s raid of the warehouse they’re holed up in is cut short, for reasons unknown. Sneaking inside (and sidelining a few unfriendly friendlies along the way), May discovers that both the S.H.I.E.L.D. agents and others are under the control of their gifted target — and are feeding on pain.

May battles the pain-hungry army, and then takes down the gift target seemingly controlling them. Except, the Russian woman is not the puppet-master after all — no, it’s the young girl that was “abducted” by the baddies and taken inside the building. Thus, to stop this tyke from killing her minions with a mere wave of her hand, May must do the unthinkable — and kill young, insane Katya.

In the wake of the day-saving massacre, all anyone can do is assume it was May’s handiwork, thus slapping her with the “Cavalry” nickname. May though is forever changed bu the tragic encounter, going from a bright-eyed agent, wife and wannabe mother to a chilled-to-the-bone, hardened victim of her unspeakable experience.

Meanwhile, at (in?) Afterlife…. 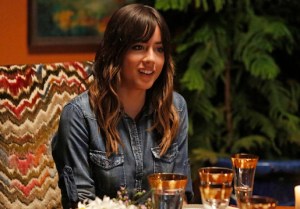 With Jiaying’s tutelage, Skye got a better grasp on her gift — to identify and manipulate the frequency of naturally vibrating objects, to the extent that she was able to even trigger an avalanche on a nearby mountain. (I really hope no Afterlifers had gone out for a hike!) Yet Skye couldn’t shake a nagging question: Why has Jiaying, the person in charge at Afterlife, taken her under her wing?

Thankfully, after a waterglass-playing session that would put Gracie Lou Freebush to shame, Skye deduces that Jiaying is her mother. Jiaying then shares how after Cal “pieced me back together,” they scoured the Earth to find their daughter, to no avail — and while losing themselves in the process. Jiaying promises to make up for it all, but for now they must keep their connection a secret, since their “people” may see any favoritism as a threat.

Jiaying then beseeches Skye to indulge her — nay, Cal — by joining both of them for one “family” dinner. Cal revels in the perfect-ness of the occasion, which starts off pleasantly enough as Mom and Dad recount the story of the night of Skye’s birth. (Oops, awkward — Skye realizes she’s actually 26, not 25!)  But then Lincoln enters, unseen, and he gleans that a “dream” Raina shared with him earlier, of Skye having dinner with her father, with daisies, was in fact a premonition.

For the episode-ending coda, we see Fitz hiding out in a diner bathroom, where he has finally cracked open Fury’s toolbox. He reports the good news to Hunter and Coulson, who invite him to join them off the grid — provided that they can teach him on the fly how to shake a tail!

What did you think of “Melinda”?