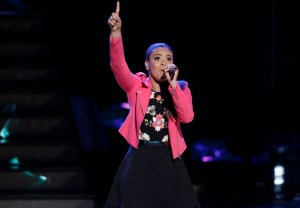 I could say it’s not worth paying attention to The Voice coaches’ comments — which, expressed in paint colors, would range from Rose-Colored Glasses to Fawn(ing) Grey to Sugar-Coated.

But then you’d miss the subtle, sometimes hilarious subtext of Blake, Pharrell, Adam and especially Xtina when they deliberately avoid comments about actual singing — turning everything to pure comedy in the process. (Sample critique: Ms. Aguilera’s “You’ve got that girl-vote goin’ for ya” after mega-hot Corey Kent White hit maybe 60 percent of his notes at best while covering a Jason Aldean ditty.)

I kind of wish, though, that when the show has a crazy talented and very astute mentor (like this week’s guest Reba McEntire), they’d plunk a fifth chair on the stage and allow that one person without a horse (or horses) in the race to offer some post-performance Real Talk. 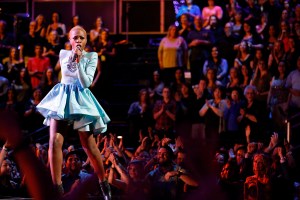 It’s a minor complaint, but one that Mark Burnett & Co. might want to address. After all, as American Idol learned during the Dark Days of “Judge” Ellen DeGeneres, bland, across-the-board declarations of “I’m so proud of you!” and “That was amazing!” can only drag the ratings needle downward.

Anyhow, enough about the already famous folks on this show, let’s get on with my letter grades for Top 12 Performance Night:

Team Blake: Hannah Kirby — Stevie Nicks’ “Edge of Seventeen” — Grade: B- | Hannah was decidedly less shouty this week than during “I Feel the Earth Move” in the Live Playoffs, but when she waded out into the pit, her “I guess this is my thing now” dancing and the wandering look in her eye took me completely out of the song. Plus, if I want to hear a Stevie Nicks tune sung in the same exact style as Stevie Nicks, I’ll just listen to Stevie Nicks, thank you very much.

Team Adam: Brian Johnson — Sting’s “If I Ever Lose My Faith in You” — Grade: C+ | Why did Adam bother saving Brian only to saddle him with a tune that was clearly not a good fit for his voice? (#BringBackTonyaBoydCannon) I mean, when the nicest thing Blake can say is that you were “so loud” and that your voice “distorted the mic,” you might as well wheel your packed suitcase on stage during Tuesday’s results telecast. And as if Brian’s song wasn’t hindrance enough, the fact that he exudes about as much charisma as a glob of lukewarm refried beans makes his elimination as much a certainty as the alcohol in Blake’s cup.

Team Xtina: India Carney — Hozier’s “Take Me to Church” — Grade: B | There’s no denying India’s monster talent — but I’m still not fully convinced the opera-trained beauty knows what to do with it. I liked Xtina’s idea to push India outside her comfort zone, but why point her into the same rock-soul lane that fellow teammate Kimberly Nichole is already dominating? India’s excessive vibrato and randomly held notes toward the end of the performance seemed like a desperate attempt to create a Capital M Moment — when what she really needed to do was work harder at bringing to life the haunting and undeniably sexy nature of Hozier’s lyrics. 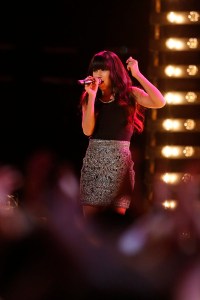 Team Pharrell: Mia Z — Rolling Stones’ “Miss You” — Grade: A- | It’s official: I’m obsessed with the textures of Mia’s very distinctive instrument, the way she can wrap it around whatever tune Pharrell throws her way and draw me into her world of gritty blues. “Miss You” allowed the teenager to showcase those skills on a breezier, more uptempo number than we’re used to, but the end result was no less satisfying… right down to the dolphin cry “ooh-ooh-ooh-oohs” that Blake loves so much. I worry a little that the lackadaisical nature of the song — and her early position in the Top 12 lineup — means there’s a tiny chance Mia will need a Twitter Save come Tuesday, but hopefully that’s just paranoia in a season where judges’ and viewers’ decisions have been so solid, I can’t help but fret it’ll all come crashing down any second.

Team Adam: Deanna Johnson — Hillsong United’s “Oceans (Where Feet May Fail)” — Grade: C | Anyone notice how Pharrell rambled on about Deanna’s previous issues with nervousness — which really just underscored the tentative, tremulous vibe she brought to a song which she didn’t seem all that eager to tackle? Not only did girlfriend’s voice get drowned out by the band in the opening verse, but Deanna sounded under the melody for almost the entire song — her uncomfortable smile quite possibly indicating she could sense the disaster she was cooking up, as well. 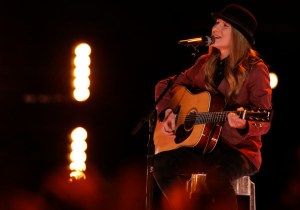 Team Pharrell: Sawyer Fredericks — John Lennon’s “Imagine” — Grade: A- | Sawyer’s iTunes sales have been so sensational all season that I actually started wondering if The Voice‘s producers instructed the judges to find something minor to nitpick incessantly (i.e. that sweet, disappearing falsetto note on “you-ooh-ooh”) — thereby blunting the kid’s momentum and making for a less predictable march to victory. Trouble was, that momentary vocal crumble only added to the wide-eyed emotionalism Sawyer brought to the song. I dug how his melodic tweaks on the chorus — pointing downward where you’d have expected him to sail upward — never came off as change just for change’s sake. And the grit that percolated through the final third of the performance was so powerful, it helped my brain delete all evidence of those heinous audience SwayBots and hear John Lennon’s classic with fresh ears — neither of which are easy tasks!

Team Xtina: Rob Taylor — Screamin’ Jay Hawkins’ “I Put a Spell on You” — Grade: B | Rob’s ability to go from piercing falsetto to dirty growl is impressive, but I was shocked by the excessive praise the judges had for a performance this week in which Rob left no note unpunished. I mean, if every single part of a song is smothered in gallons of ad-libs and howls, the end result is like a restaurant dish comprised entirely of sauce. No matter how tasty it is, there’s an oddly empty feeling once the plate is cleared.

Team Blake: Corey Kent White — Jason Aldean’s “Why” — Grade: D | Corey’s face looks like it was created in a research lab with the specific purpose of fronting videos that’ll kill it on CMT’s Hot 20 Countdown. His vocal, though, was more suited to the “fraternity-sorority circuit” where Corey’s been cutting his teeth the last few years. Just how out of tune was the angel-faced troubadour? Let’s just put it this way: I’m not sure Blake has ever told one of his own team members (this early in the season) that he “didn’t sing perfectly.” Fret not, though, Big Softy went on to tell Corey he’d “delivered the lyric perfectly” — which is as much a consolation prize as when Kelly and Michael give an Outback Steakhouse gift certificate to a losing contest caller, rather than the all-expenses-paid Hawaiian vacation he was hoping to score.

Team Pharrell: Koryn Hawthorne — Kelly Clarkson’s “Stronger (What Doesn’t Kill You)” — Grade: A- | Koryn may not rank No. 1 in anybody’s final analysis of Top 12 night, but she is a clear-cut winner in the Most Improved category. The delectable way she played with the melody during her introductory chorus, the staccato punches she gave to the chorus, even the way she threw her body into the groove all brought to vivid life the “I will survive” vibe of the lyrics — and her muscular, warbly tone was in fantastic form, too. Pharrell needs to work with Koryn about bringing more dynamic range to her songs — it all felt a little cranked up to 11 from start to finish — but she’s the kind of dark horse who ought to be making her more hyped rivals a little nervous.

Team Adam: Joshua Davis — Simon and Garfunkel’s “America” — Grade: B+ | Joshua’s opening verse was a little difficult to understand thanks to some iffy enunciation and the raw power of the Voice‘s house band and background vocalists. That bit of trouble didn’t throw the charismatic dad off his game, though, and the remainder of the ditty proved an excellent study in laid-back, effortless storytelling. 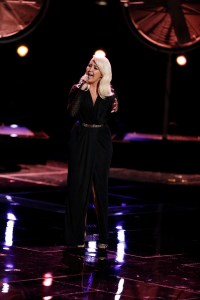 Team Blake: Meghan Linsey — Little Big Town’s “Girl Crush” — Grade: A | It’s always tough to tackle a song that’s capturing the current zeitgeist, but Megan brought a ’60s R&B girl-group energy to Little Big Town’s “controversial” country jam — her raw, booming voice rising and falling to make palpable the heartache that’s at the center of this “lost my man to another chick” jam. There wasn’t a single note out of tune — and while some folks think Meghan is too much of a pro to really belong on The Voice, it’s hard to argue against any scenario that led to a performance this thrilling, no?

Team Xtina: Kimberly Nichole — The Animals’ “House of the Rising Sun” — Grade: A+ | Speaking of thrills… Kimberly’s “House of the Rising Sun” might possibly knock Amanda Brown’s “Dream On” off the perch in my All-Time Greatest Voice Performances gallery (to be updated soon right here at TVLine.com). Kimberly’s explosive battle-cry of a voice bought me a first-class ticket to New Orleans, delivered me right at the door of the house of ill-repute in question, and showed me the faces of those ruined by its siren temptations. The way the rock-and-roll ballerina leaned back and strutted the stage, her growling, howling tone piercing through the arena, made this performance a physical and spiritual revelation — like getting hit with shock paddles and submerged in the river for a baptism all in one sweeping motion. If that sounds crazy, well, then you haven’t watched Kimberly do her thing a half-dozen times on repeat, have you?

OK, your turn. What did you think of The Voice‘s Top 12 performance night? Who were your faves? Who’s in trouble? Take our poll below, then hit the comments to expand on your thoughts!