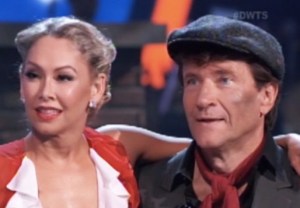 Have you ever wanted to see The Bachelor‘s Chris Soules dressed in a toga? How about Rumer Willis in purple face paint? Or Mark Ballas with the face of a bunny rabbit?

Well, even if none of those experiences were on your TV bucket list (and if they were, I have a lot of questions), Dancing With the Stars delivered them on Monday, as the remaining contestants took the stage for Disney Night.

And even though a fairytale ending was in store for Season 20’s strongest couples, one unlucky pair did not ride — er, sashay — into the sunset.

I’ll get to the results in a moment, but first, here are the highlights from Dancing‘s most animated evening yet:

BEST OF THE NIGHT | Riker Lynch and pro Allison Holker (Paso Doble) — Rumer and Val may have bested Riker and Allison, numerically speaking, but the R5 singer undoubtedly delivered the most personality and power of the night. Truth be told, the rehearsal footage — in which Riker just wouldn’t stop milking that Jack Sparrow impression — left me worried that he wouldn’t take the paso doble seriously and fully embody the masculinity that was required of him. Instead, he brought so much energy to the performance that my only concern was how far Allison might fly across the ballroom during some of the most intense lifts.

MOST ENCHANTING | Noah Galloway and pro Sharna Burgess (Foxtrot) — Carrie Ann Inaba was right when she said Noah and Sharna’s routine was lacking in content, seeing as the war vet essentially stayed in one small section of the dance floor for most of the number. That said, the Aladdin-centric dance, set to “A Whole New World,” captured the exact magic that most other couples chased throughout the evening. As the couple beamed their way through the foxtrot (and Noah tapped Sharna adorably on the nose), their movements came with an ease that made the entire performance a joy to watch.

BEST RESPONSE TO PAST CRITICISM | Nastia Liukin and pro Derek Hough (Jazz) — This duo’s main critique throughout the past four weeks has been a lack of emotional connection, due to Nastia and Derek’s busy coast-to-coast schedules. In Monday’s routine, though, Nastia and Derek completely embraced the cutesy lip-syncing of their Frozen number and performed a jazz dance that was fun, lively and, most importantly, believably romantic. (Bonus points for not dancing a foxtrot to “Let It Go,” which I only just got out of my head after nearly 18 months.)

WORST OF THE NIGHT | Robert Herjavec and pro Kym Johnson (Quickstep) — Not even Robert’s unwavering enthusiasm could distract from his messy footwork in this Mary Poppins-themed number, which quite literally got off on the wrong foot. As the pace of the song increased, Robert’s movements seemed more and more frantic, which kept him from ever matching Kym’s grace and fluidity. The Shark Tank vet has been so eager throughout the competition — and his chemistry with Kym so infectious — that I don’t think this misstep will get them eliminated, but I also wouldn’t be surprised to see them in serious jeopardy next week.

And now, those all-important results:

“I think all women my age should go on hormones,” Somers said, laughing, before adding of her partner, “He is a gentleman, and he gave me everything he had.”

Your turn! Were Suzanne and Tony the right choice for elimination? Which of tonight’s dances will earn your vote? Hit the comments with your thoughts!