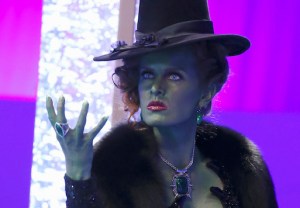 Without the Author so much as lifting a quill, ABC’s Once Upon a Time this Sunday served up a rewrite on both the Wicked Witch’s fate and what exactly went down during Emma and Hook’s Season 3-ending time travel.

Bookended by sadly sparse Storybrooke sequences, this episode was rife with Robin Hood, in flashbacks to two different times. Jumping back to long ago in Sherwood Forest, we found newlywed Robin of Locksley struggling to abandon the thief’s life and keep his tavern in the black. As such, he accepts a deal from Rumple to travel to Oz and pinch from the Wicked Witch the Elixir of the Wounded Heart. Upon arriving in Oz, Robin meets Will Scarlett, and offers to steal some elixir for his new pal. But just as Robin is procuring the elixir, Zelena interrupts, before he can draw a second vial.

After, Robin lies to Will that his mission was a compete failure — but after spinning a yarn about how the elixir was to heal his own heart after his sister’s tragic death, Robin slips his friend the elixir before he returns to Sherwood Forest. Back home, Robin enlists the merry men to ward off the tax-grabbing Sheriff of Nottingham and then explains to Marian his newfound purpose: to steal from the rich and give to the poor, thus making him a “hero.” And she’s totally on board with it. 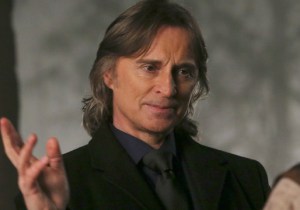 to nine weeks ago in New York City, Robin, Marian and Roland are crashing at Neal’s old place when Rumple comes by, aghast to find squatters in his son’s apartment. But mid-rant, Rumple collapses from a heart attack. Later at the hospital, he makes a deal with Robin: find and steal some Elixir of the Wounded Heart from the “Wizard of Oak” (aka Walsh, unseen), and Robin can stay at Neal’s place. Robin steals the potion, gives it to Rumple and leaves — thus, he doesn’t see that it fail to work. And that is because, an arriving “Marian” reveals, she swapped the potion with Nyquil — because she is really Zelena, using a “glamor” spell.

Everyone take a deep breath before the next info dump. Ready? OK, here we go….

When Rumple “killed” Zelena last spring in the Storybrooke jail cell, her “life force” (or whatevs) floated over to the barn where that portal had formed. As such, when Emma and Hook entered the portal, she went along for the ride to the Enchanted Forest of the Past. Once there, Zelena used the glamor spell to replace Marian, whom she vaporized. Ergo, the “Marian” that Hook and Emma brought back to our realm/time (and who got frozen by the Snow Queen etc;) was Zelena all along. Z’s original plan was to rob Regina of her happy ending by getting Robin to fall (back) in love with “Marian,” but she ultimately realized that wasn’t going to work.

Now, back in the NYC hospital room, Zelena leverages the real elixir to make Rumple add her own happy ending to his list of requests for the Author.

All of this is told in flashback as, in Storybrooke, Rumple invites his prisoner Regina to give her soul mate a call — and when she does, Zelena answers, taunting her sis with anecdotes from her life with Robin, meatloaf and all. As Rumple explains, if Regina refuses to help him and Cruella turn the Savior dark — thus freeing the Author to give the villains their happy endings — Zelena is one phone call away from killing Robin Hood.

So who will Regina choose? Save Robin, or spare Emma?