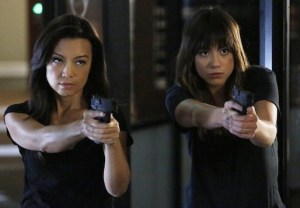 Because even though Marvel’s Agents of S.H.I.E.L.D. just a week ago tied a series low in the demo, ABC is reportedly eyeballing a spinoff of the sophomore drama.

According to EW.com, which first reported the news, the project is being penned by S.H.I.E.L.D. executive producer Jeffrey Bell (whose writing credits also include Angel and The X-Files) and co-exec producer Paul Zbyszewski (Hawaii Five-0, Lost).

As for what/who it will entail, story elements yet to come during S.H.I.E.L.D. Season 2 — which has six episodes left in it — will lay the groundwork for the prospective offshoot, though there won’t be a blatant “planted spinoff” episode a la this week’s Criminal Minds: Beyond Borders or Chicago Med, or Arrow‘s fall 2013 introduction of the fated Flash, Barry Allen.

Now Agent Carter fans, before we fear the worst as the Internet is prone to do, it sounds like this would be supplemental to (and not preclude) any possible second season of the Hayley Atwell starred.

This is where you hit the Comments section with your theories on the nature of the spinoff.