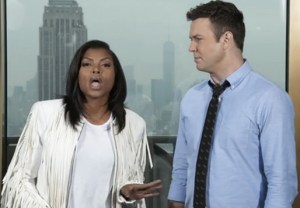 You won’t see any flying shoes in the just-released promos for Taraji P. Henson‘s episode of Saturday Night Live (NBC, 11:30/10:30c), but you will see plenty of face-on-face action — because Cookie Lyon always gets her man.

An earnest Taran Killam stands alongside the Empire scene-stealer for a series of videos in which Henson slaps him, teaches him her ways and, inevitably, gets down and dirty. (That sexual tension. Yowza.)

This is actually a pretty huge week for Henson; in addition to her SNL debut, news broke Monday that she’ll be heading back to CBS’ Person of Interest for a special cameo appearance this season.

Now, the only question is: Will Henson seek revenge for SNL‘s disappointing Empire parody a few weeks ago? Someone’s got to answer for that.

Hit PLAY on the preview video below to enjoy Henson and Killam in all their glory: