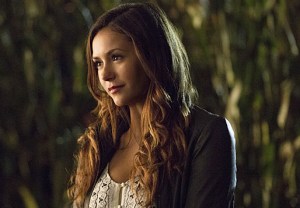 It’s true, Vampire Diaries fans: After six seasons of life among Mystic Falls’ finest, Nina Dobrev’s Elena Gilbert is bidding farewell to the supernatural CW drama this May — but how?

Will she take the cure? Will she end up with Damon? Will she even live to see what becomes her friends and lover(s) in Season 7? The possibilities are virtually endless, and even though we’ve barely had time to process the news of Dobrev’s departure, TVLine has already cooked up 10 potential exit strategies for her character.

(Spoiler alert: One possible happily-ever-after reunites Elena with a former, non-Salvatore flame, while several others actually allow the character to remain in Mystic Falls — with a few stipulations, of course.)

And even though Dobrev’s emotional Instagram post promised, “If you think you know what’s coming, you don’t,” we’d like to think at least one of our endings could be at least partially plausible. Like, let’s remember what show we’re talking about, people.

Browse our gallery of Elena’s possible endings below, then drop a comment: How do you think her story should be wrapped up?