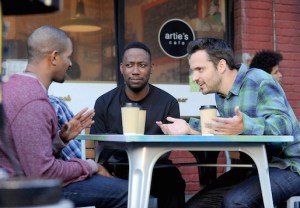 Lamorne Morris hasn’t made many requests since he started playing New Girl‘s Winston. One was that his kooky character become a cop. Another was that the Fox series seriously consider what that means in America today.

“I love police officers. I think they’re awesome. They look cool as hell when they do stuff,” Morris tells TVLine. “My favorite movies involve police officers. It’s just, you can’t escape some of the things that are shown in the media. You can’t help but see it.”

He’s referring to recent news stories like a Ferguson, Mo., police officer fatally shooting Michael Brown, and a New York City police officer putting Eric Garner in a chokehold, a move later found to have probably caused his death. The incidents of police brutality were referenced often, Morris says, in messages from fans via his Twitter (@LamorneMorris) and Instagram (@lamorne) accounts.

So he approached New Girl executive producers Liz Meriwether, Brett Baer and Dave Finkel with the rough idea for a Winston storyline. “I said, ‘Is there something we can say about what’s going on?'” Morris recalls. “‘Even though it’s a comedy, and it’s television,’ I said, ‘we have to say something.'”

The result is tonight’s episode (9/8c), co-written by Morris, in which Winston hides the fact that he’s a cop from a pretty love interest (played by Kiersey Clemmons, Eye Candy/Transparent) who’s an anti-police demonstrator. (In typical New Girl fashion, Winston explains away his uniform by pretending to be a stripper.)

The half-hour’s most in-depth examination of the subject comes during a conversation among Nick, Coach and Winston at the loft.

“That was one of the pivotal moments,” Morris says. “We talk about the stance we have on it, which is: Growing up black, you do fear the police at times.” He mentions a time in Chicago years ago when he and a friend, who also is black, were handcuffed and questioned about stealing a car (which Morris happened to own), yet Morris’ white then-girlfriend who was with them was treated with respect.

The matter is a shade more serious than what the series usually tackles — you’ll recall, Winston is the same character who spent an episode wearing a sweatshirt as pants — and Morris chuckles as he previews that what viewers will see is less “militant” than what he originally penned.

Working on the episode with New Girl writer Rob Rosell “helped me humanize a lot of stuff,” Morris says. “It’s gotta be lighthearted. You’ve got to ease up on it a little bit. Still hold your ground, still keep your point, but this is not HBO.”

As for KC, the demonstrator who catches Winston’s eye, Morris teases that fans shouldn’t hold out too much hope for a happy ending. “Winston finds a way to screw up everything. We’ll see,” he says. “The only love he really needs is from his cat, Ferguson.”