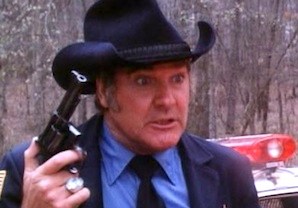 Actor James Best, best known to ’80s audiences as Sheriff Rosco P. Coltrane on Dukes of Hazzard, died Monday from complications of pneumonia, the Associated Press reports. He was 88.

Best played the inept lawman during the CBS show’s entire seven-season run (1979-1985).  Additional TV credits included guest stints on The Andy Griffith Show and In the Heat of the Night.