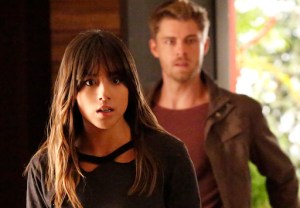 This week on ABC’s Agents of S.H.I.E.L.D., Skye got the 10-cent tour of the Afterlife, Nick Fury’s “toolbox” fixed a broken relationship and Coulson called in for very special “backup” when Gonzales’ team closed in on him and Hunter.

MOM’S THE WORD | Having summoned sightless (?) Gordon to whisk her away after she quaked all over Bobbi and Kirk Acevedo, Skye woke up to a most unusual “acupuncture” session, which she learned was to help her finish healing from her transformation. Her “transitioner,” Lincoln (played by The Tomorrow People‘s Luke Mitchell), says the place that she has been taken to is called “Afterlife,” and that for everyone’s safety only Gordon knows the way in/out. Lincoln explains that most of the people there have been waiting to be “chosen,” but Skye “jumped the line” — and via the old-school method, with a diviner in a Kree temple, the first time that’s been done in thousands of years!

Lincoln breaks the news to Skye that the transition is irreversible, but surmises that she is actually more curious than afraid. So he shares his own gift — the ability to amass and channel electrical charges, in such a way that he can even levitate her. “We’re connected to something extraordinary,” he notes. “Don’t walk away from it.”

Lincoln can’t divulge details about Skye’s father or Raina, though we see that Cal is being held in a drab, windowless room. When he divines from visiting Gordon that Skye is nearby, Cal gets aggressive, to little avail. “Your lack of discipline has risked everything,” Gordon tells Cal. “It has sealed your fate, and the fate of your daughter as well.” Meanwhile, over popcorn, Lincoln slips that Raina is also at Afterlife, “on her own path” yet deserving of “the same care.” Quaking Skye finds and confronts Raina, who scoffs at Skye’s laments, countering: “You wanted to follow me [into the temple].” Porcupine-y Raina further taunts Skye by saying, “I am on the outside what you are on the inside” — just as Jiaying shows up to play peacemaker. “What you two were in the past is not what you are now,” she tells the girls. Then, to (shhh, her daughter!) Skye, she says: “I have chosen to be your guide. All I ask for is a few days. If you don’t feel a connection, we never need to see each other again.” Afterward, Jiaying visits Cal to affirm, “You were right — it’s Daisy, our daughter.” Though she won’t let him see her.

BOX-ING MATCH | Elsewhere, Gonzales is determined to get inside Fury’s toolbox, but Fitz declines to provide any know-how, and thus packs his bags and leaves. Simmons suggests to Gonzales the solution isn’t a technological one but a lab one, and offers her input. Later, Gonzales talks to May about Coulson’s alien transfusion and apparent death wish. “Are you loyal to Coulson or to SHIELD?,” he asks. “They’re the same,” May flatly answers. When she says he’s wasting time on a witch hunt for powered people, Gonzales notes that such individuals can lose control — to the point that they need to be “put down,” as “the Cavalry” once did to someone in Bahran. But May’s unflinching. “When Coulson’s ready, he’ll find you,” she warns. “He’s the one man you can never put down.” Later, Gonzales offers May a seat on the board, believing that Coulson should have a strong advocate and stressing that if the organizations remain pitted against each other, “SHIELD will fall again.”

WHO’S THE ‘BAD OPTION’? | Meanwhile, returning to the safe house where Skye had been kept, Coulson and Hunter review video of her quake-out and subsequent exit via Gordon. Feeling they’re “out of options” — and lamenting that he lost Skye and SHIELD in the same day — Coulson invites the “real” SHIELD to the cabin, assuring Hunter that backup is on the way. Alas, said reinforcements don’t arrive by the time SHIELD rams through the Hulk-proofed door, so Coulson and Hunter get led away into a Quinn jet… which they manage to seize after their “backup” finally arrives… in the form of Mike Peterson aka Deathlok! (Coulson to Hunter: “I wanted to see the look on your face. Priceless.”) As they jet off, Mike reports that HYDRA’s Dr. List is collecting and experimenting on powered people like Skye. The only way to stop him, says Coulson, is by resorting to “our bad option” — Grant Ward. 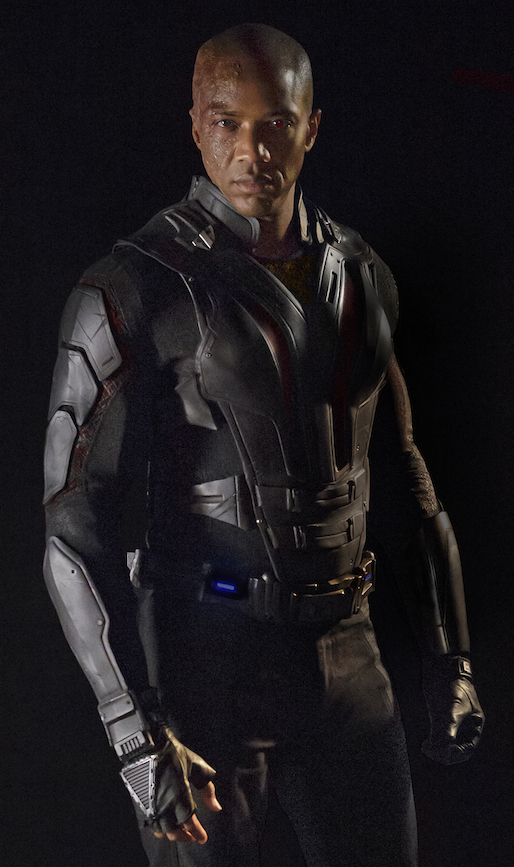 Then, in the final, crowd-pleasing coda, Simmons reports to Bobbi and Mack that Fury’s unopenable “toolbox” is nothing but junk, while Fitz hops into a cab… with the real toolbox, because Jemma had deftly fashioned a fake. (As an added bonus: she also slipped him his favorite sandwich, prosciutto and mozzarella, with a hint of pesto aoili)

IS DEATHLOK BACK, FOR GOOD? | Discussing his surprise S.H.I.E.L.D. encore, J. August Richards says, “Yeah, Coulson has had Deathlok in his back pocket… so he pulls me out of hiding to help out.” And help he did, thanks to some nifty new toys (hello, wrist rockets!). “As you can see, I got a lot of upgrades,” Richards smiles. “The character has been evolving since we saw him last. This is like Deathlok 2.0.”

Because not only has Mike’s cyborg self been outfitted anew (“I have three USB ports, Firewire… the thing on my arm makes cappuccinos,” Richards jokes), but the man inside has adopted a new POV. “Every time I come back, I feel like I’m playing a completely different character,” the actor effuses. This time around, “Mike Peterson is owning his role as Deathlok, and that’s a whole different performance.”

Richards notes, “Coulson and Mike have actually been secretly working together since we last saw Mike” — in part because Mike “looks up to” Coulson and sees his redemption in that relationship. As for others on Coulson’s (splintered) team getting a gander at Deathlok 2.0, he hints, “There was a lot of unfinished business… and I think you’ll get to see that played out a bit.” (With reporting by Scott Huver)