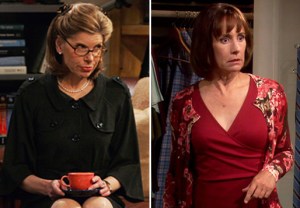 The Big Bang Theory is celebrating Mothers Day a little early this year.

Christine Baranski and Laurie Metcalf are set to reprise their respective roles as Beverly Hofstadter and Mary Cooper in the CBS comedy smash’s penultimate Season 8 episode, TVLine has learned exclusively.

This marks the first time Baranski and Metcalf will turn up in the same episode (airing Thursday, April 30), although it’s unclear if the two will share any scenes.