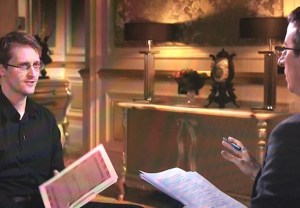 Last Week Tonight host John Oliver flies to Russia and interviews whistleblower/ leaker Edward Snowden. To paraphrase one of the show’s running gags, is this really a thing?

What at first seemed like an elaborate gag during Sunday’s episode turned into a semiserious chat with one of the most pursued men in the world when Oliver traveled 10 hours to talk with Snowden, who was charged in 2013 with espionage after leaking classified documents related to secret NSA surveillance programs.

Sexts. Citizenfour, the Oscar-winning documentary about Snowden (which HBO, Last Week Tonight‘s network, happens to have broadcast.) The KGB. All of these topics came up during the course of the interview, during which Snowden explained in detail several of the NSA programs — using illicit photos as an example.

After showing Snowden man-on-the-street video in which regular people couldn’t identify him or what he’d done, Oliver deadpanned that he should just return to the United States, “since it seems like no one knows who the f–k you are.”

Just after the interview aired, Oliver tweeted this:

Press PLAY on the video below to watch it all happen.