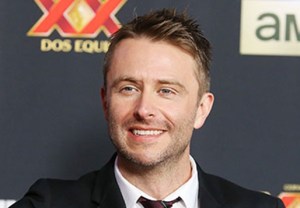 Chris Hardwick is going for the hat trick — of talk shows, that is.

The @midnight and Talking Dead host is teaming with Syfy to create a weekly Nerdist News series, per The Hollywood Reporter.

Hardwick, who is also the CEO of Nerdist Industries, would not host the half-hour series, but executive-produce it alongside Nerdist collaborator Brandon Monk.

The project — which would focus on the latest trends in technology, science and more — is currently a YouTube series hosted by Jessica Chobot, though a host for the Syfy installment has not yet been chosen.

* Ten episodes of Doctor Who will be released as a $12 digital box set through the file-sharing service BitTorrent, The Guardian reports. The episodes include “Rose,” “The Empty Child / The Doctor Dances,” “The Girl in the Fireplace,” “Blink,” “The End of Time,” “The Vampires of Venice,” “The Doctor’s Wife,” “The Rings of Akhaten,” “The Day of the Doctor” and “Listen.”

* FX is developing Brightmoor, an animated comedy executive-produced by Sean “Diddy” Combs. Per our sister site Deadline, Brightmoor focuses on the students at an inner-city Detroit elementary school.

* Annaleigh Ashford (Masters of Sex) has joined the cast of Super Clyde, Deadline reports, CBS’ comedy pilot about a fast food worker (The Middle‘s Charlie McDermott) who uses his late uncle’s inheritance to carry out good deeds. Ashford will play Britney, the high school sweetheart of Clyde’s brother, Duke, who dumps him once she realizes Duke will not be getting his uncle’s fortune. (Nice girl!)

* FX has released two new teasers for the upcoming fifth season of Louie — and, as per usual, the titular comedian just can’t catch a break: