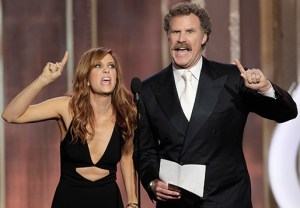 We hope you’re sitting down, because the details of Will Ferrell and Kristen Wiig‘s next project are a lot to process.

The Saturday Night Live alumni — who also co-starred in IFC’s The Spoils of Babylon — are reuniting for a Lifetime original movie. No, you didn’t misread that.

Per The Hollywood Reporter, Ferrell and Wiig are reuniting for A Deadly Adoption, in which they play a successful couple who take in a young pregnant woman (90210‘s Jessica Lowndes) and plan to adopt her unborn child — but this is a Lifetime movie, so you can expect things to go haywire pretty quickly.

The masterpiece, slated for a summer premiere, is being described as “campy and fun and a contemporary wink at the genre.” (In other words, an instant classic.)

UPDATE: Less than 24 hours after news of A Deadly Adoption broke online, its stars have decided to scrap the picture. Ferrell released the following statement to Entertainment Weekly:

We are deeply disappointed that our planned top secret project was made public. Kristen and I have decided it is in the best interest for everyone to forego the project entirely, and we thank Lifetime and all the people who were ready to help us make this film.

Well, that was fun while it lasted.