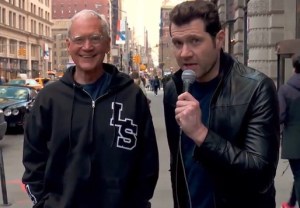 Get out of the way, “two comedy legends coming through!”

On Wednesday’s Late Show, David Letterman joined Billy Eichner for one of his signature man-on-the-street pieces, where they harassed inconspicuous New Yorkers about Letterman’s upcoming retirement.

So what should the inventor of the Top 10 list do when he steps down from his late night perch? Suggestions include starting a podcast in celebration of New York City, shuffleboarding with Dan Rather, and everything. Literally everything.

Conversely, pedestrians weren’t as interested in what Paul Shaffer might do. Not to worry, though — the longtime bandleader has connections in Canada, as Letterman points out.

So press the PLAY button below, and witness the hysteria that ensues. You might even learn a thing or two about Letterman’s burgeoning profile in Pakistan!