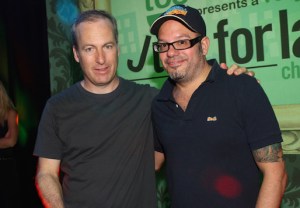 Netflix, this could be the continuation of a beautiful friendship.

The streaming service has ordered to series With Bob and David, a sketch-comedy show from longtime pals and collaborators Bob Odenkirk (Better Call Saul) and David Cross (Arrested Development), according to our sister site Deadline.

The deal calls for four half-hour episodes — plus an additional one-hour “making-of” special.

Deadline reports that the duo are describing their new project as follows: “After being dishonorably discharged from the Navy SEALs, Bob and David are back serving our country the way they do best: making sketch comedy. Four half-hours of brand-new comedy featuring all new characters, all new scenes and, most importantly, all new wigs.”

Excited about Odenkirk and Cross back together again? Sound off in the comments!