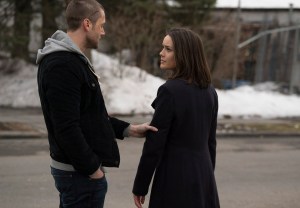 This Thursday’s episode of The Blacklist (NBC, 9/8c) is being advertised as the battle between Tom (the man who loves Liz Keen) and Red (the man who protects her).

But judging by these photos from the upcoming installment, Liz has already made her choice.

Even after Tom pulled a sneak attack on Liz — in her own home! — last week, she seems more than willing to help her ex escape his dangerous bosses in this week’s hour. Unless that affectionate hand on his face means something totally different.

Also featured in the snapshots: Ana de la Reguera (Eastbound & Down) as the latest Blacklister, a provocative frame-up artist who targets the wealthy elite. Oh, and Red looks disgruntled, but that’s not exactly new.

Browse the photo gallery below — or click HERE for direct access — for a first look at Thursday’s Blacklist, then hit the comments with your thoughts!