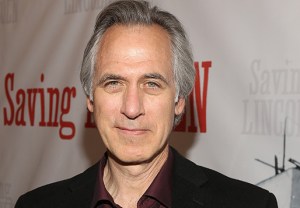 The Graysons may be dropping like flies on Revenge, but another family — namely, the Abbots — appears to be more unified than ever.

Tom Amandes, who played Emily VanCamp‘s TV dad Dr. Harold Abbot on The WB’s Everwood, will guest-star in an upcoming episode of the ABC drama, though details about his character are currently unavailable. Amandes’ recent work includes recurring roles on Parenthood and Scandal.

VanCamp (her tweet since deleted) and Amandes broke the news via photos of themselves on set:

But the photos, while glorious, also raise a few major questions: For example, why is Emily in court? And why does she appear to be wearing a prison jumpsuit? Could the fourth — and potentially final — season of Revenge really end with Ms. Clarke behind bars?

Take a really good look at the photo above, then drop a comment below: What are your predictions for the end of Season 4?