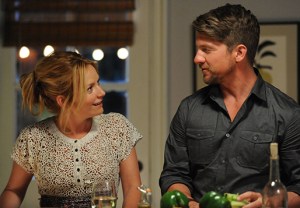 Look no further than the title of Fox’s Weird Loners to learn exactly what the freshman comedy is about.

Before the series premiere really dives into each of its titular outsiders, it would be easy to think, “Aw, those guys are just misunderstood!” But as the episode continues, we soon realize that, no, these people are a little crazy and also sort of terrible.

Let’s break down the quartet:

* Caryn Goldfarb (Ugly Betty‘s Becki Newton), dental hygienist: Despite being engaged to a kind and well-meaning (if a little clingy) guy, Caryn’s first appearance on the show is on a singles’ cruise, where she’s trying — and failing, miserably — to meet someone new.

* Stosh Lewandoski (Happy Endings‘ Zachary Knighton), VP of sales: Gifted though he may be when it comes to his job, Stosh gets fired for sleeping with his boss’s fiancée — after slipping her some ecstasy.

* Zara Sandhu (newcomer Meera Rohit Kumbhani), artist: She starts her day by moving out of her apartment and breaking her live-in boyfriend’s heart… and she wasn’t even going to tell him about it!

* Eric Lewandoski (Hello Ladies‘ Nate Torrence), tollbooth attendant: The most kind-hearted of the bunch (and also Stosh’s cousin), Eric is just a bit socially awkward, having lived with his parents since graduating college.

Through a series of unfortunate events, the foursome eventually gathers at Caryn’s apartment, where the engagement dinner she attempted to cook for fiancee Howard is ruined by a) burnt food and b) her inability to resist Stosh’s seductive ways. (Seriously, this guy has got to start going after women who are actually single.)

After realizing she wants a more exciting relationship than Howard can offer, Caryn calls off the engagement — rather nonchalantly, might I add — before heading to the park with her newfound friends, where they crash a happy couple’s wedding and remind us that misery indeed loves company.

OK, your turn. What did you think of Weird Loners‘ series premiere? Grade the episode in our poll below, then hit the comments to back up your choice!