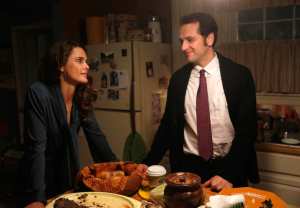 FX is Russian to pull the trigger on another season of The Americans.

The cabler has renewed the Keri Russell-Matthew Rhys Cold War drama for a 13-episode fourth season, to premiere in 2016.

“Remarkably, this season of The Americans has achieved even greater acclaim than that of its first two seasons,” marveled Nick Grad, FX’s Original Programming Co-President, in a statement. “The series has cemented it status with critics as television’s best current drama and arguably the best show on TV, and we couldn’t agree more… We look forward to the final four episodes of season three, and beyond, in Philip and Elizabeth Jennings’ riveting journey.”