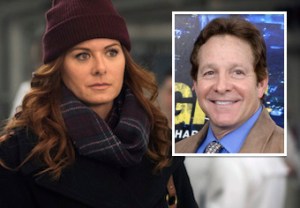 Filmdom’s erstwhile Sgt. Carey Mahoney just might save the day during a May sweeps episode of The Mysteries of Laura.

TVLine has learned that Police Academy alum Steve Guttenberg will guest-star on the May 13 episode of NBC’s freshman cop drama as… himself. As the episode unfolds, the funnyman will be recruited as an on-the-fly co-conspirator when Laura needs some “celebrity arm-candy” to slip inside the Tribeca Film Festival, so as to track down a pivotal clue in her murder investigation.

Melissa Joan Hart, as previously reported, guest-stars in the same episode, as the host of a Serial-like radio program.

Guttenberg’s previous TV credits include History’s recent Sons of Liberty mini, episodes of Party Down and Law & Order: CI, and an arc on Veronica Mars.