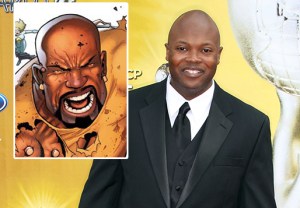 Coker, whose recent credits also include Ray Donovan and Almost Human, will write the first two episodes of the series, which centers on the street thug turned strength-enhanced hero originally seen in comic books.

The Good Wife’s Mike Colter will headline the Luke Cage series, which was originally announced as part of the Marvel/Netflix team-up that kicks off April 10 with a Daredevil series starring Boardwalk Empire’s Charlie Cox, continues with AKA Jessica Jones (starring Krysten Ritter), also gives Iron Fist his own show and culminates in a miniseries event that reimagines The Defenders, Marvel’s dream team of self-sacrificing, heroic characters.

* Lifetime sudser Devious Maids will return for Season 3 on June 1 at 9/8c, marking the series’ move to Monday nights.

* Kimberly Donovan returns! Patsy Pease will reprise her Days of Our Lives role for five April episodes, per Daytime Confidential.

* IFC has ordered eight episodes of Benders, a half-hour comedy about a group of friends bonded by an irrational obsession for their amateur hockey league.

* Justified actor/Lost alum Jeff Fahey has joined the upcoming second season of From Dusk Till Dawn: The Series, El Rey Network announced Tuesday. He will recur as Uncle Eddie Cruickshank, the man who raised the Gecko Brothers after their father died and has a chance to get back in the game when Seth and Richie show up.

* Barbara Walters will return to TV in American Scandal, a newly announced series on Investigation Discovery in which the anchor will revisit compelling stories she has covered throughout the years, revealing never-before-heard details and offering personal insight.

* Bravo has ordered NeNe and Kim: The Road to Riches, a docuseries which will follow Real Housewives of Atlanta alums NeNe Leakes and Kim Zolciak Biermann as they drive from Atlanta to Los Angeles.