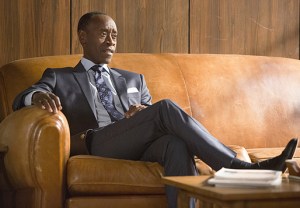 Showtime will continue to build its House of Lies.

The premium cabler has renewed its Don Cheadle-led comedy for a 10-episode fifth season, the network announced Tuesday.

The renewal comes just two days after Lies‘ Season 4 finale, in which Cheadle’s Marty fought to save his consulting firm from the brink, while Kristen Bell’s Jeannie gave birth to Marty’s baby.

“When you have a gifted acting ensemble led by Don Cheadle and smart, acerbic writing led by showrunner Matthew Carnahan, you expect something special, and House of Lies delivers for us each season,” Gary Levine, executive vice president of original programming at Showtime, said in a statement.

Looking forward to more House of Lies? Hit the comments!