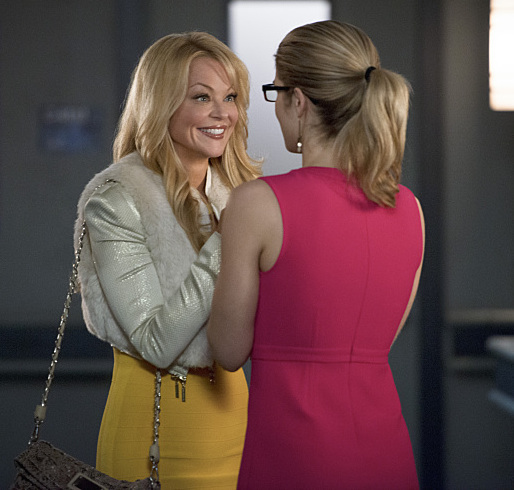 In case you haven’t been anywhere near the Internet for the past 10 weeks: Charlotte Ross is making an encore as Arrow‘s Donna Smoak, in the episode of the CW hit airing this Wednesday at 8/7c.

To say that the NYPD Blue alumna was welcomed the first time around with open arms — shedding as she did some needed light on Felicity’s past — is to put it lightly. In her TVLine Q&A, Ross reacts to the fans’ outpouring of affection, teases the role Donna will play in helping her little girl sort through some big problems, and weighed in on our ideas to keep Mama Smoak in Starling City.

TVLINE | Did you have any idea what you were getting into when you first got cast on this show?
Oh my gosh — are you kidding? I’ve been in this business for a while and I’ve never seen anything like it. And because I’ve “been around the block” in the business, I don’t take it for granted. I’m just so overwhelmed with gratitude. What’s so amazing is that people were welcoming with such love before I started airing! I said to Emily [Bett Rickards], “They don’t even know if I’m a killer or something.” [Laughs] I could be this terrible mom. It’s really the perfect storm, because the show is so well-written and Emily is just so overwhelmingly talented and beautiful. I think people really want to know more about her, her background, her family, so they were eager to see her mom. The icing on the cake, of course, is the character they wrote for me.

TVLINE | What do you like most about the role of Donna?
It’s just so juicy and layered and based in truth, but funny….. There’s such a dichotomy between [Felicity’s] linear, M.I.T. thought process and my Vegas cocktail waitress character. [Laughs]

TVLINE | As far as TV daughters go, you definitely got a good one in Emily.
Oh, I feel so blessed. You know how beautiful she is on the outside, but I can’t stress enough how beautiful she is on the inside. She’s such a giving actress, she’s fun to work with, she’s a true professional…. We just have a blast. We have a natural chemistry, and you sometimes never know if that’s going to happen on set. The rest of the cast is so fun, too — and at this point in my career, that’s really all you can ask for. So I’m a happy girl right now. The fans, though…. I’ve never seen anything like it. I’ve been on some shows where they do tweeting and the fans are very vocal — like Glee and such — but this…

TVLINE | I see it on Twitter and it’s as if you’re getting a big, warm cyber-hug.
I mean, how lucky am I? They’re so sweet and supporting and they say such wonderful things.

TVLINE | I sometimes want to shout to them, “Hey, I knew her back in the Days days!” I mean, I crushed on Eve Donovan hard.
Oh, really?! Yeah, Eve was a bitch. That was a great role.

TVLINE | The chemistry you and Emily share certainly comes across on screen.
She sent me a text before I even showed up on set for my first episode, saying, “Welcome aboard. If you want to rehearse, here’s my telephone number. If you want to get together and talk about the characters…” She was wonderful from the get-go. And I told her that I love improv, so whatever she was up for, let’s try different things and not be afraid to think outside the box. She’s so open and receptive as an actress. And again, they’ve written such a fun character for me to play that we’re giggling half the time! 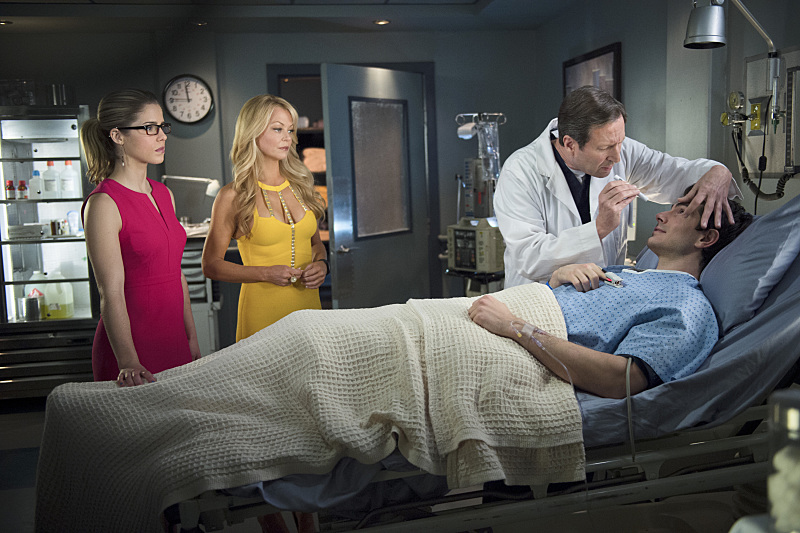 TVLINE | So, what is Donna up to this time around?
Well, we know that Donna lives in Vegas. We know that when she travels on Southwest she’s wearing an imitation Herve Leger, which I think says so much about her. [Laughs] Obviously what’s going to bring her to town is her daughter, and anything her daughter might be going through that maybe I can help her with.

TVLINE | Well, I broke the first photos of Donna visiting Felicity and Ray in the hospital.
I loved all those pictures! Don’t you like my dress? Can we talk about my dress…?

TVLINE | It’s…  a good one. Yeah. I like it.
When I tried that dress on I just started laughing. Is there a better dress that hits the nail on the head in terms of who this character is? With the glitter on the front…. It’s hilarious. So yeah, I’m in the hospital to see Ray…. I think the fans are really, really interested to know if I’m telling my daughter who to choose, so they’re going to have to tune in to see that.

TVLINE | I was curious about her take on Ray. I think Emily told us that, No. 1, Donna is like, “Yea, you have a boyfriend!”
Well as you recall, in my first episode I really just wanted her to get into a relationship. And then of course, I was hoping it would be somebody who was good looking and had money — things that are important to Donna! So obviously when I come back, you can guess how happy I am that she has a lot going on in that department. [Laughs]

TVLINE | Does Felicity talk to her mother at all about the Oliver situation and the complications there?
Donna, being as “subtle” as she is, definitely wedges her way in a bit to get to the bottom of where her daughter stands emotionally. And Donna has some strong opinions on what she should do about it.

TVLINE | I spoke to 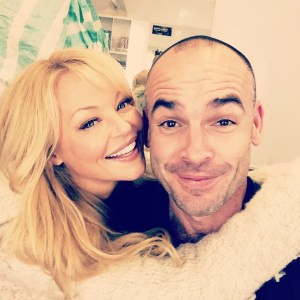 Paul Blackthorne a few weeks ago, and I know you two don’t get to play in this episode. But are you also on board for some “SmoakinLance”?
I love the quotes that he said to you. What’s your opinion on that?

TVLINE | Well, Paul expressed at PaleyFest that Lance needs to “get laid.” And he told me it would be a fun dichotomy between the two of them.
He said a quote to you, something like, “I wouldn’t know what to do with her…”

TVLINE | “He’d be sitting there across from her at dinner thinking, ‘What is this in front of me?’ and at the same time, ‘Why am I so attracted to what’s in front of me?’”
Exactly! What’s so amazing about the fans, again, is Paul and I haven’t even had a scene together.

TVLINE | But you take one seflfie and the place explodes.
Right! We had so much fun with that, and I think we’re excited at the opportunity and the prospect of it, because, as you know, he has stated that Lance, No. 1, “hasn’t gotten laid.” And No.2, I think he’s got a lot of serious stuff to deal with on the work front, so he could use a lot of fun, someone to maybe shake him up a bit. And I just have a natural feeling that those two characters would have a really fun-to-watch, interesting chemistry that you wouldn’t normally put together. Can I tell you there’s a plan for it next season? No, I can’t. But I can tell you that everybody’s aware of how the fans are speaking up, and what the fans think and feel means a lot.

TVLINE | It’d be easy enough to keep Donna around — with her cocktail waitress experience, she probably could help manage Thea’s club.
Listen to you…. That’s not a bad idea. I heard that at PaleyFest the guys [Blackthorne and John Barrowman] were fighting over me — I mean, how funny is that? That’s flattering, to say the least. I’m not sure what happened there, but I got a lot of calls, emails and tweets.

TVLINE | Plus, you have experience from NYPD Blue playing a cop. Lance could always use some help at the SCPD.
And you saw when I was a hostage that Donna’s tough, too. So, you never know!