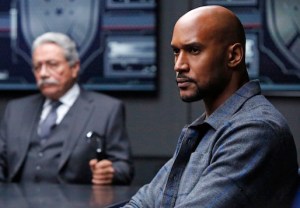 This Tuesday on Marvel’s Agents of S.H.I.E.L.D. (ABC, 9/8c), as “the real S.H.I.E.L.D.” makes life difficult for Coulson & Co., flashbacks will reveal to us the experience that first bonded Mack, Bobbi, Isabelle Hartley and Robert Gonzales — circa Captain America: The Winter Soldier, when the organization first was brought to its knees.

TVLINE | What’s extremely interesting about this week’s episode are the flashbacks, to when S.H.I.E.L.D. first fell. What sort of things will we learn?
We’re going to learn what makes everyone loyal to one another, in terms of Bobbi and Mack and [S.H.I.E.L.D. director Robert] Gonzales (played by Edward James Olmos) and the reason why they’re going through everything that they are together. The real S.H.I.E.L.D. emerged from everyone wanting to see the organization go in the right direction. Everyone is operating with good intentions.

TVLINE | That’s what separates this from, like, a HYDRA situation. These people believe they’re doing the right thing.
Exactly.

TVLINE | Would you say Mac and Bobbi are equally loyal to “the real S.H.I.E.L.D.,” or is one of them perhaps a bit wavering?
They’re both extremely loyal, but I would say that Bobbi might be a little more conflicted, because of her relationship with Hunter. In a previous episode, 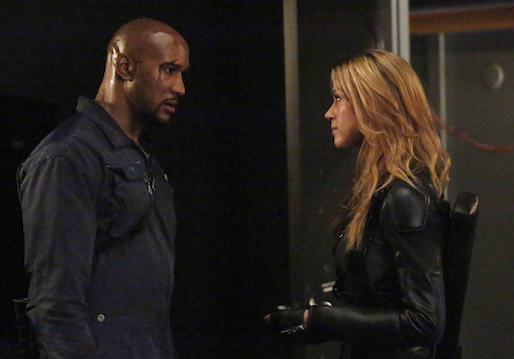 that’s what Mack had a problem with. When emotions are involved, things become conflicted.

TVLINE | What, if anything, will it take to reverse Mack’s ideology, his stance in this situation? Obviously, for the show to move forward we can’t have two rival, opposing S.H.I.E.L.D.s.
Honestly, I’m kind of waiting for that answer myself – if there is an answer. If anything turns it around for Mack.

TVLINE | What does Mack really think of Coulson?
He respects Coulson. And I think he genuinely likes Coulson. But I think he just believes that Coulson is not the right man for the job. And listen, I can’t blame him, because like Mack said, Coulson was trying to find the answers to the alien blood inside him, and those side projects weren’t for S.H.I.E.L.D. They were  his own personal thing.

TVLINE | And we saw what it did to Mack in that one instance, at the underground city.
You saw what it did to me, you saw how it affected Skye, and Trip died…. So look, I’m loyal, but if the head is going about doing things that really aren’t in our job description, and he’s using us to do things for personal reasons, and then one of my brothers dies because of it? Yeah, I have a problem. And everyone else should, too. One thing people might forget is that in [Season 2’s “The Writing on the Wall”], when Coulson is in his most crazed state and on the verge of killing Sebastian Derik (played by Brian Van Holt), no one has ever seen Coulson like that. Skye witnessed it, but she has a different relationship to him; there’s like a father/daughter thing going. So out of the whole team, I was the only one to see him like that, completely out of control. I tried to explain it to Hunter — if that happened in that instant, what’s going to happen when everything is on the line? How is he going to act? — and Hunter kind of brushed it aside. But that’s another reason why Mack is very, very deeply skeptical. 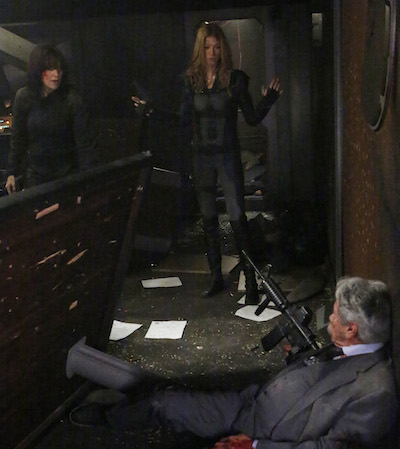 TVLINE | This week’s episode will also reiterate for us what a badass Isabelle Hartley (played by Lucy Lawless) was?
Oh gosh, yeah! I’m so glad they got her back for that. I hope they have even more flashbacks, to bring her character back into the fold. She’s a great actress and a great person, and her character is wonderful. I wish they could explore her more.

TVLINE | She does love her knife.
She sure does. And she’s good with it, too!

TVLINE | Mack begrudgingly engages in violence. It’s not his go-to move. But we haven’t yet gotten into why that is, have we?
No, we’ve never discussed that. I can tell you that Mack really is a guy that does not like violence at all, but, when pushed, it’s “by any means necessary.” He doesn’t enjoy it, but he’ll do what he has to do.

TVLINE | S.H.I.E.L.D. has to be the most fun role for you since…. when? Fill in the blank. NYPD Blue obviously was an important part of your career.
It sure was; that role was one-of-a-kind, it really was. But I did a show called Man Up (on ABC in 2011) that was a lot of fun — it was a comedy, it was challenging. I will say that this particular role is one that incorporates so many different dimensions as an actor. You have the action, you have drama, you have light comedy…. This is the one role that really encompasses all of that, and where my size is not a detriment, where it’s actually useful. This is the one role where you can really fire every cylinder. It’s a lot of fun, and what makes it fun is not just the material but the people that I work with.

TVLINE | Are you hearing any wonderfully vague things about the Season 2 finale?
If you hear anything, let me know! I just know it’s going to be big. I think it’s going to be a showstopper, just incredible. I’m trying to find out some details, but they’re not telling me anything.