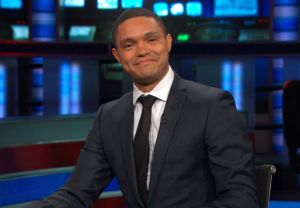 The 31-year-old South Africa native ascends to the Daily Show throne after making only three appearances as a correspondent. His promotion comes six weeks after Stewart announced that he was stepping down later this year following a wildly successful 16-year run.

Noah, whose new gig was foreshadowed Friday by our sister site Variety, reacted to the news on Twitter:

No-one can replace Jon Stewart. But together with the amazing team at The Daily Show, we will continue to make this the best damn news show!

In a statement, Stewart said he was “thrilled” for Noah, adding, “He’s a tremendous comic and talent that we’ve loved working with.”

Press PLAY below to watch Noah’s Daily Show debut from back in December, and then hit the comments with your thoughts on Comedy Central’s succession plan.