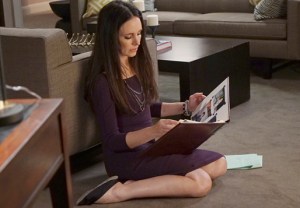 Now that Amanda Clarke is finally out in the open, and Emily Thorne has officially been put to rest, what’s next for the latter’s arch nemeses?

A lot of reading, apparently.

New photos from Revenge‘s April 12 episode find Victoria and Margaux poring over the contents of a photo album, and judging by Vicky’s menacing words in the promo (“She’s left quite a body count”), I’m thinking this is far more than a walk down memory lane.

The episode’s log line also does nothing to quell my fears: “Emily faces a promising future as Amanda Clarke… until Victoria uncovers devastating new secrets from her past.” (Gulp.)

Victoria is even seen making a pit stop at Chez Ross, where it looks like she gets some assistance from Nolan’s future ex-wife Louise. Will Emily end up paying for Nolan’s indiscretions? (That would certainly be a change of pace.)

Browse the new photos below, then drop a comment: What do you hope to see in the final five episodes of Revenge‘s fourth season?