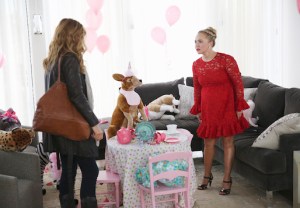 We’re gonna warn you up front: There’s not a lot of variety in these shots from upcoming Nashville episodes, but somehow, we don’t think you’re going to mind.

Because can you ever really get enough of Deacon and Rayna weeping and clinging to each other, or Juliette throwing a fit while a giant stuffed giraffe stands by as a silent witness?

The shots in the gallery below come from the April 1 and 8 episodes (ABC, 10/8c). In the first, per the official synopsis, “Rayna refuses to let Deacon wallow in his condition, but her support only frustrates him and pushes him away.” Oh Deke, your disease may be killing you, but you’re killing us with this.

RELATED Cancellation Anxiety: 9 Shows You Should Probably Start Worrying About

Then, the following week, Rayna’s plans to throw Juliette a celeb-filled baby shower go amiss when Sadie’s situation takes center stage — and we’d wager that the mom-to-be’s anger is only barely captured in these photos (though Hayden Panettiere gives amazing bitchface, does she not?).

Of note: Ju is clutching her belly in one picture. Might it be time for the Averyspawn to make her debut?

Click through the gallery below, then hit the comments with your predictions!