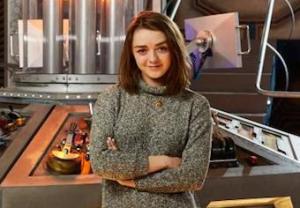 Maisie Williams aka Game of Thrones‘ Arya Stark will pay a visit to the TARDIS with a guest-starring turn on BBC America’s Doctor Who.

“We’re thrilled to have Maisie Williams joining us,” Doctor Who executive producer Steven Moffat said in a statement. “It’s not possible to say too much about who or what she’s playing, but she is going to challenge the Doctor in very unexpected ways. This time he might just be out of his depth, and we know Maisie is going to give him exactly the right sort of hell.”

The timey-wimey series is currently filming two period adventures — “The Girl Who Died” (written by Moffat and Jamie Mathieson) and “The Woman Who Lived” (by Catherine Tregenna) — with Season 9 to debut this fall.