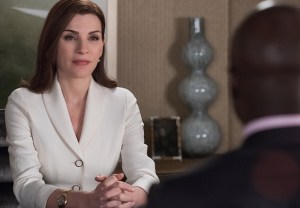 “My name is Elmer J. Fudd, millionaire. I own a mansion and a yacht.” “Hey! Who turned out the lights?” “I’ve made a huge mistake.” And now, thanks to The Good Wife, we have yet another example of a line of TV dialogue that only gets more delicious (and more meaningful) every time it’s repeated: “All options are open to me, and I plan to decide in the next 48 hours.”

One of the great things about “Undisclosed Recipients” — aka the episode after Alicia Florrick wins the race for State’s Attorney — is that every time she utters the aforementioned “compromise,” she’s flintier, funnier, at once more exasperated and more aware of her own power.

Sure, Alicia’s campaign process sent her down a morally/ethically slippery slope at Olympic slalom speed, but she’s also proving a quick study in the art of the brushoff, the veiled threat, the charming smile that barely masks disdain and derision, the knowledge that no matter who helped her win the election, she’s the one with an army of attorneys at her disposal and the authority to dispatch ’em where she sees fit.

The question, of course, becomes whether Alicia temporarily leased out her soul for the sole purpose of bringing true change to the legal system — or if the Lemond Bishops and Guy Redmaynes and James Castros of the world have slowly but surely chipped away at everything “good” in our titular character’s makeup.

Not that these paths are mutually exclusive, of course — and that’s what’s making Season 6 such a mind-bender. And so, while Alicia’s personal life, professional life and moral compass all stand at a crossroads, let’s recount how the Good Wife‘s latest hour played out:

CHAMPS FOR THE CHAMP! | Alicia arrives at Florrick-Agos-Lockhart the day after her win and finds her office completely overrun by congratulatory swag — including a scales of justice statue very reminiscent of the murder weapon on How to Get Away With Murder. (Coincidence? I suspect not!) Marissa tells the new State’s Attorney she can only accept gifts under $75 in value — resulting in a smashed bottle of perfectly good champagne. It turns out to be just the first valuable thing Alicia “breaks” in her new power position.

Her predecessor Castro comes by, asking her to keep his No. 2 on the job and to promise not to investigate him. Power donor Redmayne has his own candidate to foist on Alicia — in exchange for the $1 million he gave to her campaign — and his comparison of Alicia’s feet to those of a “whore in Arizona” just makes his demands that much creepier. Finally, there’s former client/major drug dealer Bishop, who tells Alicia he wants to get out of the “business” — but needs her assurances she’ll stop ASA Geneva Pine’s investigation of him, since most reformed drug dealers wind up behind bars or dead. (Little does Bishop know, but methinks that Pine is looking into Kalinda’s legal misdeeds, not his own…)

Alicia shuts down all three fellas with a display of “Hey, I just won” enthusiasm — and seems almost taken aback when each of ’em responds with a threat. Castro suggests he can bog Alicia down by overloading the S.A.’s office with losing cases before she’s sworn in. Redmayne huffs that the neophyte politician has overplayed her hand: “Give me 20 hours and I’ll show you power!” he rages. Bishop punches a wall when Alicia says he’ll need to implicate all his lieutenants if he wants a free pass.

All of Alicia’s novice indignation sends Eli off the deep end. “The absence of ‘yes’ plus time equals ‘no,'” he seethes — bringing to mind Crimes and Misdemeanors‘ “Comedy equals tragedy plus time.” He wants Alicia to be “a Disney princess” — and not outright crush any of her benefactors’ dreams. In fact, he insists she bring ’em back to her office for conciliatory sitdowns involving some variation on, “All options are open to me, and I plan to decide in the next 48 hours.” Rich, powerful men are forgetful, after all, Eli contends — and they don’t necessarily expect their demands be met, they just want to know they’re being heard.

Alicia is smart enough to know she has to swallow her words — or else risk sinking before she’s even boarded the State’s Attorney’s ship. Castro and Redmayne buy the “All options are open to me” in the way you’d expect from career politicos. Bishop, who’s all too familiar with polite dismissal, fires back with an equally chipper,  “I appreciate your openness.” Only Eli, who has his own suggestion for Alicia’s No. 2, is completely taken aback when his own words get sent back in his direction. Hey, he’s the one who hit Alicia over the head with his message of, “Go slow. Choose carefully,” right? 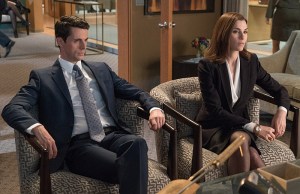 WHAT A HACK! | The week’s other big plot focuses on two areas: The Florrick-Agos-Lockhart partners attempting to cheaply buy out Alicia’s share in the firm — knowing her new post requires her to quickly divest — and a hacking scandal exposing the firm’s emails to the public and resulting in dozens of simmering (or boiling) tensions among the firm’s employees. It’s not pretty — Julius refers to David Lee as “a racist fruitcake”; Diane suggests Cary’s imprisonment might not be that bad of a hit, given his middling skills; Howard Lyman tells someone Kalina is “a good lay” (the one time in recent memory that our be-booted investigator loses her cool).

The whole leak springs from a Florrick-Agos-Lockhart suit on behalf of a movie studio claiming a file-sharing service hurt led to early leaks of a film that hurt its box office, but the real upshot is the tension exposed among friends and close colleagues. There’s a great scene at the end of the hour where Cary tells Diane that “an apology is in order.” To which she zings, “From whom to whom?” And then, with that trademark Cary smile, he shoots back, “Take your pick.”

Still, when Cary, Diane and David insult Alicia by dropping their buyout offer from $350,000 to $100,000 — she’d wanted $650,000 — Alicia proves she’s not above using the throne her new office to get exactly what she wants. “I want you to know,” she says in the most slow, deliberate fashion,  upon news of her former colleagues’ lowball offer, “that this offer does not in any way impact any consideration of your criminal cases when I am State’s Attorney.” They know it’s not just a hint of a threat, but a promise of one, and in this rare instance, I’m inclined to agree with the Florrick third of the named partnership. (Hey, it’s always easy to go against David Lee.)

Finn, by the bye, is representing Alicia in her negotiations — and we get another peculiar variation on their pas-de-will-they-or-won’t-they when she volunteers that she described him in an email as “soft and malleable — with a spine of cottage cheese” while he was prosecuting Cary. That said, she still wants him to rejoin the SA’s office in the role of her No. 2 — which makes me think that maybe she’s written him off as a potential romantic partner? (Either that, or the risk of a sexual-harrassment suit really turns Alicia on.)

Oh, and under the subject of “what turns Alicia on”… Marissa goes through thousands of Alicia’s emails that didn’t get exposed by the hack — but certainly could be — and finds not only are there instances of the late Will Gardner referencing their extramarital sexytimes, but one in which Alicia talks to campaign manager Johnny about their pre-election erection. (Sorry, I couldn’t pass up a good rhyme.) “Relax, it was just a one-night stand, albeit a great one,” reads Alicia’s missive. Marissa finds Alicia’s use of “albeit” to be utterly quaint, but how the electorate will feel if their sainted spouse proves all too human could be very interesting kindling for Season 7.

What did you think of this week’s Good Wife? Did you side with Alicia or her former partners? And who presents the biggest threat: Castro, Redmayne or Bishop? Share your thoughts in the comments!