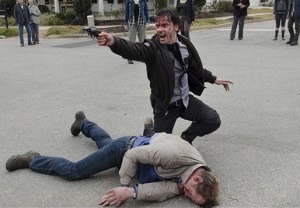 THE PERFORMANCE | We always knew that Lincoln could play the living daylights out of anything that was thrown at him. But until this week’s episode of The Walking Dead, we didn’t realize that he could act his way from A to Z all within the span of a single hour.

Talk about a revelation! Early on in “Try,” the native of London revealed his character’s sweet, sensitive side during his interaction with (forbidden) love interest Jessie. Next, he showed us how doggedly protective his alter ego could be when Jessie’s abusive husband, Pete, made the mistake of trying to mark his territory. And finally, TV’s most underrated performer proved that nobody – and we mean nobody – could lose it as well as he could, as a bloody, beat-up Rick began a rant that was meant to signal a coup, but…

HONORABLE MENTION | The Middle patriarch rarely lets his guard down, which is why it was such a joy to witness Mike Heck get caught during his automobile jam sesh, followed by his complete and total denial of the occurrence. It wasn’t initially clear why he grew enraged when Frankie and the kids busted his chops, but he soon revealed his “performance” was his way of assuaging pent-up stress over Sue’s dwindling college prospects. Neil Flynn excels as the habitually stern father figure, but his all-out Boston rock-out reminded us just how great he is in looser, zanier moments, which once made up his entire performance on a little show called Scrubs. (And hey, whaddya know? The Janitor also had “More Than a Feeling!”)

HONORABLE MENTION | The Americans‘ Elizabeth Jennings can always be counted on to get the job done. In Wednesday’s episode, she once again accomplished her task, but, at the same time, her portrayer Keri Russell allowed us to see the cracks that are starting to form in the armor of the steadfast Russian spy. The actress was restrained and quietly powerful as Elizabeth listened to guest star Lois Smith wax nostalgic about her son and late husband before forcing the old woman to take her own life. And, possibly for the first time, Russell revealed to us an Elizabeth rocked to the core by her “evil” behavior.

HONORABLE MENTION | If The Mindy Project doesn’t get renewed — and we don’t get more of the sublime Chris Messina as Danny Castellano — we’ll be as upset as Dr. L without her daily bearclaw. In Tuesday’s season finale, Messina balanced moments of silly curmudgeonness (the joy with which he infused Danny’s riff on hating Boston) and tender ache (the sadness with which he finally confessed he didn’t want to marry Mindy). Above all, we were blown away by Messina’s work in his scene with Rhea Perlman, the actor laying bare the hurt and fear of abandonment underlying Danny’s cynicism. Bring Mindy — and Messina — back, Fox; don’t make us unleash our inner Beyonce Pad Thai on you.