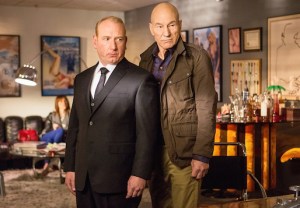 Star Trek: The Next Generation‘s Patrick Stewart has a new TV role, and it’s light years away from TNG’s upright Capt. Jean-Luc Picard — see for yourself in the new trailer for Starz’s Blunt Talk.

The promo introduces us to Walter Blunt, a cocaine-snorting, alcohol-swilling, police-attention-getting British journalist bent on civilizing America from behind his cable news desk. He’s loud and opinionated, and he seems to make poor decisions in nearly every aspect of his life. (Exhibit A: What is he doing with those swords?)

Press PLAY on the video below to get to know Walter and his crew.