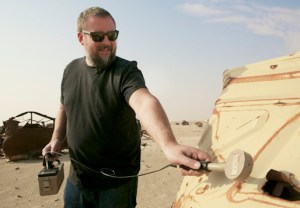 HBO is very into VICE.

The premium cabler has renewed its balls-to-the-wall newsmagazine series for four more seasons, which will see it through Season 7.

Each go-around will consist of 35 episodes, up from 14 in its current second season.

RELATED Looking Cancelled at HBO, But Patrick’s Story Isn’t Over Yet

In addition, VICE will produce a half-hour newscast that will air five days a week, 48 weeks a year, on the network.

The Emmy-winning documentary series, which grew out of the publication of the same name, has made a name for itself for its willingness to cover tough and/or dangerous stories in depth. Recent topics include cancer, global warming and the militarization of American police departments.

“I think the first thing, perhaps the hardest thing I learned about journalism over the past 20 years is that maintaining any type of independence, any type of freedom, is difficult as you scale up,” Shane Smith, CEO and founder of VICE, said in a statement. “This deal, simply put, allows VICE the freedom to go after any story, anywhere we find it – and to do so with complete independence. This deal is a tremendous gift and a tremendous opportunity, and we at VICE realize this.”