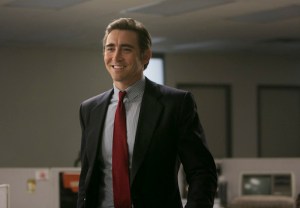 Halt and Catch Fire‘s second season is about to boot up.

AMC announced on Thursday that the series, which stars Lee Pace as a champion of the personal computer revolution, will return on Sunday, May 31 at 10/9c, and pick up the action in early 1985, as the Internet — then just a disruptive idea — begins to take shape.

“To our passionate core audience and the critics who loved the show through Season 1 — we thank you sincerely for your support. Season 2 won’t disappoint,” showrunner Jonathan Lisco said in a statement. “We’re going to drill down even deeper into these characters we’ve created, to give you all the emotional and psychological depth you’ve come to expect from Halt and Catch Fire, while at the same time evolving the show to be brasher and even more addictive.”

The entire first season of Halt and Catch Fire will be available for streaming on Netflix beginning Wednesday, April 8. It is currently available on AMC On Demand and AMC.com.