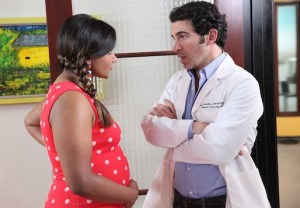 Mindy Lahiri, your lies of omission are the stuff of legend.

The expectant OB-GYN spends the first third of The Mindy Project‘s season finale trying to get Danny to come to Boston to meet her folks — and after he doesn’t, she’s forced to admit to Peter that her parents have no idea she and Dr. C are together.

PHOTOS Cancellation Anxiety: 9 Shows You Should Probably Be Worried About

But that’s only one of her problems as the comedy’s third season comes to a close. Mindy also has preeclampsia, and she’s forced to come face to face with a gaggle of her ex-boyfriends, thanks to Morgan and some classic Three’s Company action. Read on to find out what happens in “Best Man.”

* Mindy really wants Danny to come to Boston with her to bid her parents goodbye before they leave for a year in India. Also, he’s never met them. He plans to meet her in Beantown after a late surgery, but when it runs over, he calls and apologizes but says he’s not going to make it. Mindy is disappointed (and, might I add, gorgeous in a sari and traditional jewelry).

* Back at home, she tells a visiting Peter — who’s asked her to be his best man — that she wanted Danny at the party so badly because she’s never told her parents about him. Morgan overhears part of the conversation, immediately thinks the worst (of course) and rounds up several of Mindy’s former boyfriends, whom he presents at Mindy’s surprise baby shower at Annette’s. As Lee, Jamie, Casey and Josh look on, everything gets straightened out/admitted… including Danny admitting he doesn’t want to get married.

* After Mindy leaves, Annette takes her son to task for being so cynical about marriage: “Maybe the problem isn’t marriage. Maybe the problem is, we picked people who didn’t deserve it.” With Mindy stuck in New York with preeclampsia (can’t fly, which means she can’t go to Texas for Peter’s wedding — don’t worry, Jeremy steps up and Best Mans his heart out), Danny leaves… but he travels to India to meet her parents instead. When their door opens, he announces, “Hi, I’m Danny Castellano, and I’m in love with your daughter.”

That’s it for the season, kids! What did you think of the episode? Tell us in the comments!