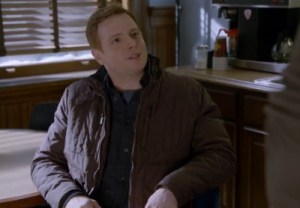 On this Wednesday’s Chicago P.D. (NBC, 10/9c), the arrival of Halstead’s playboy/doctor brother Will (played by Shameless‘ Nick Gehlfuss) makes quite the impression on… Lindsay!

In the following exclusive video, Will tries to suss out which member of Intelligence has captured Jay’s heart: Erin, Nadia — they’re both hot, he notes — or “that desk sergeant from downstairs.” (We like your sense of humor, Will.)

His question is quickly answered when Jay introduces him to his colleague/ex, who is surprised to meet someone from his family.

“Jay, just because I don’t want to lose my job doesn’t mean I don’t care about you,” Lindsay tells him.

Press PLAY to watch the sneak peek, then hit the comments with your first impressions of the other Halstead bro.