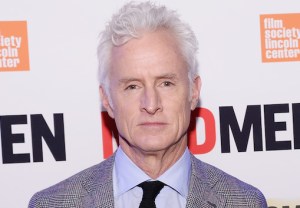 Details about Wet Hot American Summer‘s Netflix continuation are about as hard to come by as the keys to the archery hut. But at a recent junket for Mad Men‘s final season, TVLine got John Slattery to spill a few details about the character he’ll play in First Day of Camp.

The eight-episode Web series, which is based on David Wain and Michael Showalter’s 2001 cult comedy film, gave Slattery an opportunity to act opposite members of the original cast.

“I didn’t realize how many of those people I knew!” he says. (Slattery was not a part of the movie.)

“From Chris Meloni to Paul [Rudd], Amy [Poehler], Bradley [Cooper], Zak Orth — I’ve known all those people over the years,” he adds, noting that the shoot “was spread out all over the place” based on everyone’s busy schedules.

“We were literally shooting two-person scenes that only one person was in, so you’d go back two weeks later and shoot the other half,” Slattery says.

Mad Men‘s final episodes begin April 5 (AMC, 9/8c); now that Slattery has been part of the streaming video service’s Arrested Development (he played drug-addicted anesthesiologist Dr. Norman) and Summer, is yet another nostalgia project in the works?

Slattery jokes that he hopes so. “I need a job!”