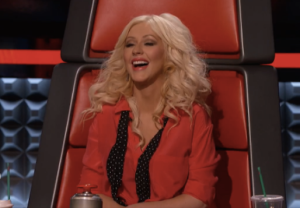 We pity the fool who throws shade — accidental or otherwise — in Christina Aguilera’s direction.

And in the following exclusive clip from The Voice‘s Season 8 Knockout Rounds (kicking off tonight, 8/7c on NBC), that fool just so happens to be Blake Shelton.

As the country coach attempts to weigh in on a showdown between Team Xtina singers Sonic and Ashley Morgan, Xtina begins to question Blake’s choice of words — especially his comments on her own “style of singing.”

Press PLAY to watch the highly amusing exchange — and to see how Blake quickly corrects course much to his fellow coach’s delight.