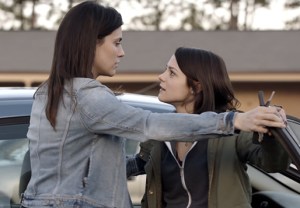 The search for Finding Carter‘s titular heroine doesn’t technically begin until March 31 (10/9c), but MTV is giving fans a head start with a sneak peek of the harrowing season premiere.

MTV on Monday released the first eight minutes of the episode, which picks up directly following the events of last season’s finale; Carter’s still in the loving care of Lori, whose penchant for making sketchy phone calls is alive and well, while the Stevens family freaks out from an uncomfortable distance.

Highlights from the first eight minutes include:
* Max and Taylor redefine their relationship.
* Elizabeth gets some not-so-good news about her role on the force.
* Grant officially reaches his personal breaking point.
* Lori reveals the next phase of her plan… and it’s really messed up.

Hit PLAY on the preview video below, then drop a comment: What are your hopes for Finding Carter‘s sophomore season?