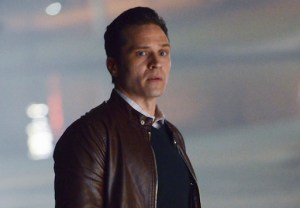 This week on ABC’s Castle, Ryan’s latest gig working private security resulted in a very public tragedy, while Beckett’s identification with a murder victim helped nudge her to make a career move.

What this Ryan-centric outing had over, say, Season 5’s “Fenton O’Connell” undercover op is that we had Ryan being Ryan — though he was markedly more serious, since he took it quite personally that the shooting of a congressman and an associate went down under his watch.

Also, the Case of the Week was pretty well-crafted. As Seamus Dever previewed for TVLine, it was told partially in flashback, as Ryan and other witnesses tried to piece together what happened — before he and Rick busted out standing silhouettes and laser beams to map out impossible bullet trajectories and such.

I feared, when I reported on the guest casting for this episode, that Reiko Aylesworth’s character would wind up being the killer, since the ageless 24 alum was the name-iest name here besides Desperate husband Ricardo Chivara. So I was pleasantly surprised to see that final zag happen, where the congressman’s wife had an (illicit) alibi. Instead, misleadingly meek chief of staff Megan was actually behind the shooting, though her motive was a li’l fuzzy. (That said, I would have also been fine with “billionaire industrialist” Carl Shelton being our killer; David Andrews always makes for a good baddie.)

As noted above, the episode afforded Dever the chance to tackle some decidedly intense scenes, especially when Ryan confronted brother-in-law Frank (Ghost Whisperer‘s David Conrad) about the money he’s been making on the side. (Note to self: spare press badges to the right event can fetch $5K, cash.)

The episode was, yes, rather Caskett-less — that opening bit with the PowerPoint grumbling was utterly disposable. But the examining 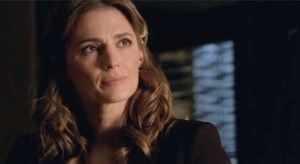 of the vic’s personal effects (why would Castle only now be finding out Beckett hates that part of the job…?), coupled with that rando guy’s raving about Kate’s reputation (and last week’s discovery that her classmate rose in the ranks faster than her), apparently nudged her in the direction of making a greater difference, by studying for the captain’s exam. Which surely would make for an interesting wrinkle in the season (?) finale in May.

What did you think of “At Close Range”?